Jeff Lynne does nearly all work on new album from ELO 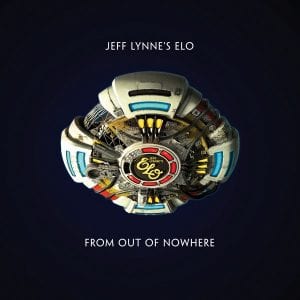 “From Out of Nowhere” is the new release by ELO. (Columbia)

Jeff Lynne’s ELO, “From Out of Nowhere” (Columbia Records)

Jeff Lynne’s ELO is an elastic band that alternates between being a one-man studio outfit and, nowadays, a 13-member touring ensemble with several guitarists, keyboard players, three string players and others.

“Time of Our Life,” from the band’s new album, symbolically brings the two versions together. Lynne plays practically everything on the track (there may be some percussion from album engineer Steve Jay) while paying tribute to the full lineup’s June 2017 show at Wembley Stadium — “60,000 mobile phones/Were shining in the dark of night.” The song briefly quotes ELO classic “Telephone Line” and there’s even a snippet of the crowd’s cheers, but don’t count on performing royalties even if you think you hear your voice.

“From Out of Nowhere,” both the album and its eponymous opening track, contain Lynne’s trademarks — the layered voices, the high-pitched harmonies, sheets of keyboards and guitars and Beatles-esque melodies. It’s all expertly played, as usual, though the drums often sound rather mechanical. With ELO stalwart Richard Tandy playing a piano solo on the rocking “One More Time,” a reunion with ELO original drummer Bev Bevan would have been welcome.

Keeping with Lynne’s usual melancholy, the lovely second track “Help Yourself,” launches a four-tune section, also including rhythmically free-spirited “All My Love,” jingle-jangly “Down Came the Rain” and weepy ballad “Losing You,” where any optimism comes right after the rose-tinted glasses have been crushed — “I still remember how you smiled and waved your last goodbye/ But somehow you will always live with me.”

Among the rest of the tracks, “Goin’ Out on Me” evokes Little Anthony and the Imperials’ “Tears on My Pillow” and closer “Songbird” includes the record’s most uplifting lyrics over its slowest beat.

“From Out of Nowhere” continues Lynne’s recent resurgence with songs that stay true to ELO’s immediately identifiable sounds. But to broaden the palette, after two albums that are solo efforts all in but name, Lynne should consider letting his much-praised touring band into the studio, too.