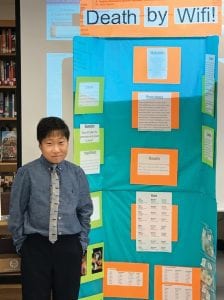 Jenkins Elementary student Jacob Estep, a fifth grade student at the Burdine campus, will represent Jenkins in the Kentucky Science Fair in Lexington in March.

Jacob’s project, titled “Death by WIFI,” examines the effects of waves from wifi routers on plant growth and germination. After taking first place in the Jenkins Elementary school science fair and placing third in the regional, Jacob qualified for the state competition. Jacob made a presentation on his work at the November meeting of the Jenkins Independent Schools Board of Education. His parents are Jerry and Tami Estep of Jenkins.

In other business, Jenkins Superintendent Mike Genton told the board that the Kentucky Center for Safe Schools had inspected the renovations to the schools in the Jenkins system and were favorably impressed with both campuses. He said he received a lot of positive feedback on the safety and security features that were added in the construction project, and the issues the Center inspection team found were minor in nature and will be easily addressed. He added that students in Jenkins were surveyed by the center, and most reported high trust in the staff, with each student having at least one adult in the building whom they trusted enough to tell about sensitive issues or problems concerning potential dangers.

Jenkins High School Cavalier Wind Band member Kenneth Sexton will tour Europe as part of the Kentucky Ambassador of Music European Tour this summer. The announcement of Jenkins students participating in the tour was made in April. Sexton’s mother Linda Sexton told the board Kenneth will need $6,695 for the tour and so far, he has raised $3,000 and paid that toward the tour. She asked the board to consider helping Kenneth with his trip and with advice on fundraising.

Superintendent Genton suggested that Sexton look into fundraising opportunities within the community, in civic organizations, and among alumni. Genton said he will work with Kenneth and try to come up with a plan and publicize the tour as well. Board member Eileen Sanders said the Jenkins Cavalier Band will perform at the Emmanuel Baptist Church Christmas Concert in Jenkins and she will ask for donations from the audience.

Elementary Principal Amanda Anderson reported that students and staff are working on a program on Building Foundations at Burdine Elementary. Anderson told the board that they are using a new version of the “Open House” educational software that focuses on developing better communications skills to focus on reading as part of the approach. They are working on enhancing reading skills, guided reading, and story structure. They have adopted a new approach to math that uses conceptual procedures rather than rote learning to teach math. Anderson said the new approach is designed to show students why they arrive at a solution instead of just memorizing a process. Genton said the district had been struggling with math and he believes this approach at the elementary level will change the way students learn mathematics. The elementary school also had a Veterans Day celebration with visits from local veterans and will have its Christmas pageant on December 16.

Director of Pupil Personnel Rondall Baker was helping to transport students to athletic events at the time of the meeting, so Superintendent Genton reported that enrollment in the system stands at 412. He also said that average daily attendance is about 91.29 percent.

Greg Marshall of WKVG radio presented a draft contract to the board to build a radio transmitter and station at the Burdine baseball field. WKVG is a small AM station that broadcasts from Jenkins. Marshall said last fall that the current tower the where station rents its space is being redeveloped and will no longer be suitable for AM transmissions. He asked the board to consider leasing the station a site near the Jenkins baseball field in Joes Branch last year. Since then, the board attorney has approved the plan and Genton said as soon as the contracts are completed the board will approve a tentative deal.

District Finance Officer Candala Gibson reported that the General Fund stood at $641,742.42 as of October 31. She said the audit report is now complete and the auditors will be at the next board meeting to present their findings. She added that as part of new state regulations, a new fund Called Fund 25 will be initiated to hold funds for school activities.

Gibson told the board that a tentative draft budget for next school year should be completed by January but will not be finalized until after the General Assembly session. She reported that SEEK (Support Education Excellence in Kentucky) has been reduced by $103,573. She said the amount of the reduction is about the same amount as the increase the system received in franchise (property) taxes last year, and this keeps the system’s funding at an equal level. Genton reported that the KETS (Kentucky Educational Technology System) offer for the first part of the year is $1,840. The board unanimously voted to accept it.