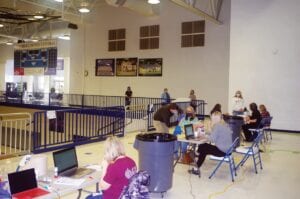 VACCINES FOR EDUCATORS — Mountain Comprehensive Health Corporation employees gave COVID-19 vaccines to teachers and other school staff from the Letcher County and Jenkins Independent school districtsThursday and Friday. School employees lined up along the balcony of the Letcher County Central High School gymnasium to wait their turn. (Photo by Sam Adams)

As the incidence of COVID-19 falls and vaccines roll out, Letcher County and Jenkins Independent Schools have announced a second attempt to reopen for a hybrid schedule, with some students attending classes in person and some attending virtual school.

But experts warn there could still be another surge as more contagious and possibly more deadly mutations of the disease from the United Kingdom and South Africa spread rapidly across the country. Health officials have also been concerned that gatherings on Superbowl Sunday might also lead to more cases a week to 10 days from now.

The federal government is recommending double masking when shopping because of the increased ability of the new mutations to spread.

About 75 percent of Letcher County and Jenkins Independent Schools employees were given the first round of the Moderna vaccine on February 4 and 5. One dose provides limited immunity, and school employees will not receive the second dose until March 4 and 5.

One dose is thought to provide more than 50 percent immunity 10 days after it is given, but the U.S. Centers for Disease Control has no information on how long that immunity will last. The vaccine has been shown to give 95 percent immunity a few days after the second dose.

The two districts announced Tuesday afternoon that school will resume on February 15, despite statefigures that show the county is still in the red with an average of 29.8 cases per day for the past seven days. Many of the surrounding counties have returned to yellow status.

Meanwhile, Gov. Andy Beshear announced Tuesday that the federal government has increased the state’s vaccine supply by 6 percent again, the third increase in as many weeks. The total has increased 28 percent since January 20. Counties have also been told they will receive a minimum of 100 doses per week, and up to enough for 10 percent of their population.

“We’re just getting the minimum guaranteed, but it’s good to do the planning because before we didn’t know from week to week how many prime doses we were getting,” Lockard said.

All vaccines coming to the health department for the past three weeks have been slated for educators.

Vaccination sites in this area are still working on Phase 1B, which includes persons over 60. There is no clear date when that will change.

The totals for Letcher and the surrounding counties as of Tuesday (according to statefigures) are as follows. Death statistics are still not reliable, however, however Lockard said a new epidemiologist has been hired to replace the person who left, and that person will begin reconciling those statistics within a few days.