Jenkins beats Harlan in OT to get to play-offs 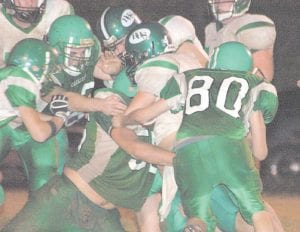 DEFENSE STARS IN OVERTIME – A swarm of Jenkins defenders teamed up to stop a Harllan Green Dragons runner short of the end zone to protect a 20-13 win in overtime and a second-straight post-season appearance. (Photo by Chris Anderson)

In their final district game of the season, the homestanding Cavs were held to only 50 yards for the entire half, which ended with Harlan leading 13-0. Cavalier Justin Hunsaker blocked the extra point attempt on Harlan’s second touchdown, saving what would prove to be a pivotal point.

Things did not look good for Jenkins, as a loss in this game would keep the Cavaliers from post-season play. A win, however, would guarantee them a spot in the playoffs for the second consecutive year.

Jenkins came out hungry in the second half, kicking an onside kick to begin the third quarter. After advancing down field, Cavaliers Matt Johnson and Chris Puckett swapped roles on fourth-and-goal, and Johnson’s pass connected with Puckett in the end-zone to cut the Harlan lead to six after a successful field goal attempt.

The magic would not last long, though, as Jenkins recovered the ball but was unable to find success on fourth and one, turning the ball over to Harlan. Harlan again turned the ball over on downs to Jenkins, and the Cavaliers returned the favor yet again.

The Cavalier defense stepped up once more. Powered by a crowd that finally come alive and fired up by the leadership of players like Brody Dixon, Jenkins recovered the ball at its own 20 yard line with 2:12 left to play.

With the Cavaliers still down by six points and 80 yards out with no time-outs remaining, senior Chris Puckett stepped up and led his teammates in an amazing drive. Still inside the Cavaliers’ own territory, Puckett connected a 10-yard pass to Matt Johnson. Johnson was able to lateral the ball to Brody Dixon, who drove for an additional 19 yards on the play to give Jenkins good field position with a minute and a half to go.

After completing several passes for short gains and running out of bounds several times to keep the Cavs in the game, Puckett then fired a third-down pass to an open Stephen Stephens for a completion and a first down. Stephens quickly became defended by four Green Dragons, but shook two tackles to drive into the endzone and tie the game at 13.

Chris Puckett lined up and booted a high flying shot that appeared good for the go-ahead point-after attempt, but the kick was ruled wide right and the game remained tied at 13.

With less than 30 seconds left, Harlan received the Jenkins kickoff and ran the ball up field. With the returner appeared headed for the endzone after shaking several Jenkins tackles and looking ahead at wide open Jenkins territory. Cavalier Junior Allen Caudill stepped up and ran down the runner for perhaps the biggest tackle of his football career. Time expired and the game went into overtime.

The Cavaliers are no stranger to overtime this season. On August 31, the Cavs went into triple overtime against Louisville school Beth Haven Academy in the Bobcat Bowl at Betsy Lane. They lost that game on a twopoint conversion. The stakes were higher this time.

Jenkins was quick to score in overtime. Chris Puckett rushed for a touchdown and kicked a field goal to give Jenkins the lead for the first time, 20-13.

Harlan scared the Cavaliers on the ensuing drive, advancing to the four-yard line before being stopped twice by the staunch Cavalier defense. On fourth-andfour, the Harlan line was penalized, as several players crossed the line before the snap, causing the Green Dragons to be moved back to the 14 yard line.

On fourth and 14, a Harlan rushing attempt for the tie came within five yards of the endzone before Cavalier Nick Taylor knocked the ball carrier out of bounds to protect the lead and give Jenkins the 20-13 win and the playoff berth.

An emotional celebration on the field followed the final play as players and coaches and fans alike were in tears of joy.

Jenkins head coach, Mark Johnson, was of few words after the emotional win. Through tearfilled eyes, he simply said, “They stepped up. They stepped up.”

Puckett had 16 carries for a total of 54 yards. He also rushed, passed, and received touchdowns. Puckett also helped himself on defense by recording 21 tackles in the game. Matt Johnson had eight catches for 172 yards and passed for a touchdown. Other notables for Jenkins were Nick Fleming and David Walker, who had 12 and 11 tackles respectively.