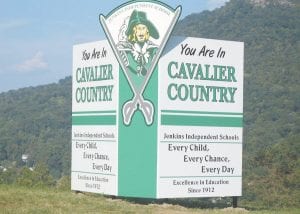 The new Cavalier mural and sign are located off U.S. 119/23 near Jenkins Middle High School. In the background is Pine Mountain with a portion of Raven Rock visible in upper right corner of photo.

Bus drivers for Jenkins Independent Schools will see a raise this year with incremental pay increases scheduled as well.

At the August meeting of the Jenkins Board of Education, Superintendent Deborah Watts told the board she was concerned that pay rates for drivers in the Jenkins system were not competitive with surrounding systems and said the school system has excellent drivers.

Watts said that although this is the “slimmest” year she has seen financially, the drivers deserve a raise. She said drivers who are already trained need enticement to stay, and that the pay hike would make the position more attractive to new drivers as well.

“When we get them trained, we want to keep them,” said Watts. “We have good people.”

The new pay package will start new drivers out at $12.00 per hour with $.50 raises for each year worked. The incremental raises will continue until a driver makes $15.00 per hour, which will be the ceiling for the time being. Wait time — the time drivers are idle during activities before starting on a return trip — stayed at $7.50 per hour. Current drivers will be paid according to their time in service on the new graded pay scale.

Board Vice Chairman Tracy Goff made the motion to accept the package and the vote was unanimous. The board is scheduled to examine all other classified and certified pay schedules in a separate meeting.

In other business, Jenkins High School Principal David Lee told the board the way sports teams and student activity groups are currently doing fundraising is not working and said it puts an unacceptable burden on some individuals and businesses in the community. He said students and those who help them solicit funds need to be aware of the effects the poor economy is having on local businesses and make sure to respect it. He pointed to an alreadycrowded fundraising schedule and said it will need to be organized into a workable plan.

The board members were introduced to the new administrative staff including Lee, Elementary Principal Stacy Collier and Middle School and McRoberts Principal Bill Castle. Lee introduced Castle as an experienced principal who served in Virginia before coming to Jenkins. Lee said the high school is now fully staffed with five new teachers. Watts added that the entire district is now fully staffed.

Board Chairman Durward Narramore Jr. told the board a new school sign featuring the Cavalier mascot is now in place in a field opposite the railroad trestle where the old Cavalier mural was located before it was painted over. Seepage through the cement on the trestle made it difficult to replace the original mural. The Little Shepherd Amphitheater, the organization that created controversy when it ordered the original Cavalier removed, replaced it with the Cavalier on dual outwardfacing signs. Narramore said he was pleased with the signs and praised Amphitheater officials for their work and for getting the sign in place before last week’s Jenkins Homecoming Days celebration.

Director of Pupil Personnel Harvey Tackett told the board that enrollment is up to 542, a gain of nine from the end of last year’s term. He said average daily attendance as of Monday (August 27) was 94.87 with a high of 96 percent at the Middle High School. Tackett said he would continue to work with District Court Judge Kevin Mullins, Court Designated Worker Mike Watts and Letcher County Attorney Jamie Hatton in a truancy diversion program Tackett says is highly effective.

Tackett also told the board he is getting estimates on installing a new access control system for Burdine Elementary School. He said September 4 through September 8 has been designated as Bullying Prevention Week. Tackett said that Nicholasville Police Officer Scott Harvey will visit Jenkins to speak about bullying to middle/high school and elementary school students on September 4.

High School Wrestling Coach Matt Butler asked that his salary be diverted into the wrestling program to fund the purchase of wrestling mats. Butler, a Whitesburg attorney, said he used his salary last year to pay rent on the mats. He said the mats could be purchased at a substantial discount.

Vice Chairman Goff reported that upgrades to lights and electronics at the Jenkins Football Field are 95 percent complete. Goff said the new lights and ballasts are much brighter and have eliminated dark areas on the field. He said the press box electronics were upgraded as well, and that the cables are underground. Goff said the old transformers were determined not to contain toxic elements and were disposed of in an appropriate manner.

Burdine Principal Collier told the board that approximately 260 people attended an open house to welcome new and returning students. She said enrollment stands at 224, an increase of about 40 new students even though Grade Six has moved into the Middle School.

Collier said Burdine Elementary celebrated the Jenkins Centennial with a visit from former Jenkins mayor and long time Jenkins High history teacher D. Charles Dixon, who wrote a history of Jenkins in the 1970s. Collier said some students wrote papers to mark the Centennial and others made posters that were displayed in several Jenkins businesses as well as the Jenkins Public Library.