Jenkins board wants 8th-grade graduation back on calendar 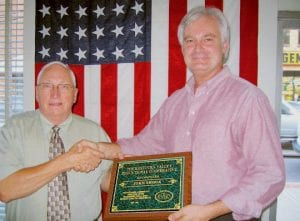 On an evening when Superintendent John Shook was honored by the Kentucky Valley Educational Cooperative for his outstanding contribution as chairman, the Jenkins Independent Schools Board of Education joined with a parents’ group to ask the Jenkins Middle High School Site Based Council to revisit a decision to cancel eighth grade graduations. After Jeff Hawkins, executive director of KVEC, presented Shook with a plaque in recognition of his service, the parents, led by David Whitaker, told the board that although they had several discussions with the council, they had not been able to arrive at a satisfactory solution to the situation. Whitaker said the council told his group that since it was now an integrated school (grades seven to 12 under one roof) they felt they should discontinue the eighth grade graduation.

Whitaker said the JMHS Council suggested that the elementary schools conduct a sixth grade graduation to replace the eighth grade one, which drew an incredulous response for board chairman Durward Narramore Jr. Narramore said the two schools, elementary and middle/ high, were separate bodies and graduation policies at one have no bearing on the other. Board vicechair Tracy Goff also alluded to the intense competition for students with other surrounding districts featuring larger and sometimes newer schools.

“We are in a competition with neighboring systems,” said Goff. “It does not behoove us to eliminate activities such as this. I share your concerns (to Whitaker). I support your endeavor.”

Board chairman Narramore asked Whitaker what basis the council had used to arrive at the decision. Whitaker said one objection the council had presented was that parental involvement has dropped off considerably in the past few years.

“We haven’t canceled any athletic events because of lack of parental participation,” said Shook.

Superintendent Shook told the board that while it cannot override the council’s decision, its number one obligation would always be to the students and through them to the taxpayers who support the system. He said that any business which doesn’t provide service to its customers will lose customers to its competition. Parent Janice Creech told the board it seemed like the council didn’t want to go the extra mile.

“The purpose of this system has always been to serve the people who live in Jenkins,” said Shook. “It’s for Jenkins and we need to listen to the people of Jenkins. Half the people who live in this community went to the old high school. The same building served K-12. But they had eighth grade graduations. I support the school (JMHS) and I support the principal and site-based council, but as is the same in everything, we sometimes tend to lose sight of our purpose and what we do. We’re in the kids business. We need to listen to what they tell us. I support an eighth grade graduation.”

Goff made the motion to have Shook act as spokesman for the board and tell the site-based council that the board supports having an eighth grade graduation. Narramore asked Goff if he would be willing to amend his motion to ask Shook to draft a resolution of support for the graduation and present it to the council and ask it to revisit its decision. The motion passed unanimously.

Goff also asked the board to clarify an earlier discussion relating to athletics uniform colors. He said the discussion about what uniform colors would be had caused considerable confusion and a good deal of grief for a number of people in the system. Goff read from a policy the board had adopted after an earlier meeting which states that gray or black may be used as a highlight color as long as the main colors of uniforms remain green and white.

“I want to put this to bed forever,” said Goff. ‘So it doesn’t return and bite us in the read end. The conflict is totally unnecessary and completely self-induced by the administration of our school.”

Goff pointed to confusion about football players wearing jerseys to school on game days and an e-mail sent out by Athletic Director Jerry Bentley concerning uniforms to all coaches and said he wanted to get the matter settled for good. Shook said that policy would become district wide if the board wished and they all agreed. Neither Jerry Bentley nor JMSH Principal Teresa Bentley attended Monday’s meeting.

In other business, Curriculum and Instruction Director Jan Tackett presented the good news that the Jenkins School District has met its Annual Yearly Goals for the No Child Left Behind Testing. Tackett said that both the elementary schools, Burdine and McRoberts, met 100 percent of their goals (nine of nine), the middle school, grades 7 and 8 also met 100 percent of its (six of six) and the high school, grades 9- 12, met nine of ten of its goals. The only group in the high school testing which failed to meet its goal was the free and reduced lunch group in math. Tackett said under Kentucky law, students on free and reduced lunch are considered disadvantaged. She said the high school faculty and staff are working on ways to integrate math into other subject matter as well as to help students having problems in math.

Tackett said schools which do not qualify for or accept Title One funds do not face penalties under NCLB, but the Jenkins System is a Title I system. She told the board the Letcher County School District is currently facing Tier 3 Consequences for failing to meet its goals. Tackett showed the board several schools in the area which hadn’t met NCLB goals including Letcher County Central High School, East Ridge High in Pike County, Belfry, and Whitesburg Middle School.

• Approved the working budget for 2007- 2008. The budget is based on expected revenues and expenditures and can be amended.

• Learned that attendance is up slightly over last year at 94.1 percent. Elementary attendance is at 95 percent and middle high school is 94 percent. Director of Pupil Personnel Harvey Tackett told the board that enrollment has leveled off and has held steady since August 22.

• Learned that a pre-bid session will be held on the second Tuesday of October for completing much of the planned work on the district buildings including replacing lights and removing the cooling tower from the high school building for repair or hopefully, for replacement. Superintendent Shook said he hopes to see work commence before the end of October and it should inconvenience students as little as possible.