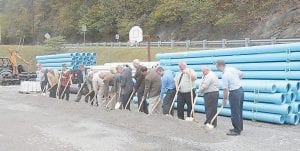 On a cold and cloudy morning Tuesday, the Jenkins City Council joined with other elected officials and citizens to celebrate a ray of sunshine for the city — a $1 million project to improve water quality in Jenkins.

Groundbreaking ceremonies were held at Jenkins City Park for the first phase of a water line improvement project which will result in the replacement of 15,000 feet of new pipe and the installation of 190 touch read meters. Funding for the project includes $600,000 from Appalachian Regional Commission (ARC) federal funding with a match of $400,000 from the Kentucky Infrastructure Authority.

“It will improve water service to 957 households, 12 businesses and thus have a real tangible impact of the quality of life for our people here in Letcher County,” Gov. Steve Beshear said during on earlier visit to the county last week. “That’s the kind of investment we need to keep making.”

Mayor Charles Dixon said Tuesday that when he took office nearly four years ago he quickly learned that water line breaks and water losses were the most pressing problem the city faced. Dixon praised city work crews for their hard work and dedication to making sure that water customers could expect clean drinking water from their tap, but said it had come at a high price to the workers. Dixon said water line breaks rarely occur during the day when the weather is pleasant, but usually happen at night when it is raining or snowing.

“When one faces a crisis, action must be taken,” Dixon said while apologizing to the elected officials present for continually harassing them with phone calls to get help in dealing with the situation. He said the water line replacement assures that future generations of Jenkins residents will have clean safe drinking water. Dixon praised the city’s utilities commission and its chairman, Ked Sanders, along with Paul Nesbitt and Nesbitt Engineering and the officials present for their help in making the water line replacement a reality.

Sanders said the city is currently producing about 15 million gallons of water, but should be able to serve their customers’ needs with about five million gallons a month after the water line replacement is complete.

Nesbitt told the audience that Nesbitt Engineering began working with the city in 1998 during the administration of former Mayor Robert “Pud” Shubert. Nesbitt said that after his firm examined the situation he had shocked the city council with his suggestion that the only way to stop the water loss problem was to replace all the city’s water lines. He said Shubert and the council eventually saw the reasoning in his suggestion and made water line replacement their goal. Nesbitt praised all the city councils and both mayors he had worked with for their hard work and dedication to staying on task and said that within five years, the city should be completely free from the problems caused by the old lines.

State Rep. Leslie Combs, who represents Jenkins as part of the 94th District, gave special praise to the city workers who she said had worked so hard to keep residents with clean water. She said that the level of cooperation between offi- cials at every level and the council had been exemplary. Combs said a number of communities in her district had water problems, but that most of theirs came from lack of a source whereas Jenkins had a good source but was losing a tremendous amount of treated water because of the leaks in the system.

Combs also extended her sympathy to District Five Magistrate Wayne Fleming, who has been instrumental in guiding county coal severance funds to Jenkins and helping to obtain funding from other sources. She said Fleming was unable to attend due to a recent death in the family.

State Senator Johnny Ray Turner also addressed the crowd and praised everyone involved for working as a team. Turner said that during his first campaign for state senate, water issues had been the first thing raised by everyone he spoke with. Turner praised Mayor Dixon for his work in making the project happen and said Dixon is an outstanding mayor and a consummate professional.

“Whoever gets elected as the next mayor will have big shoes to fill,” said Turner. “He (Dixon) has done an outstanding job.”

Mayor Dixon also introduced Pat Wooten of U.S. Rep. Hal Rogers’ office by saying he had asked Wooten for help on water and sewer issues so many times that Wooten automatically said “no” as soon as he saw Dixon coming. Wooten laughed and returned the joke on Dixon by saying that since Dixon has been so persistent in asking for help in getting the Elkhorn Lake dam rebuilt, he was just a little suspicious at having the gathering below the dam.

Wooten praised everyone involved for working together and said that throughout the Fifth Congressional District those communities making progress those where people work together for the common good rather than being divided.