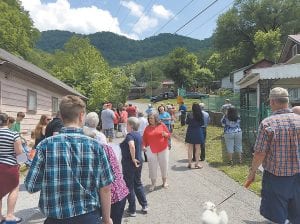 Relatives of the Blankenship brothers and others stood near the mouth of Rocky Hollow after the sign was dedicated Saturday.

Several people gathered at Rocky Hollow in Burdine over the weekend to honor the five Blankenship brothers, a true “band of brothers” who left their home to answer the call of their country and serve in America’s armed forces between 1939 and 1976.

The five — Willard, Frank, Gilbert, Maxell, and Bennett — served for a combined total of 109 years and all reached high enlisted ranks. Bennett, who passed away in April 2016, was a command sergeant major.

A large group of the brothers’ family members gathered to watch the unveiling of a highway sign dedicating Rocky Hollow road to them, and a number of elected officials and others joined the family. Mary Ann Mullins spoke to the group, which included Willard Blankenship. Mrs. Mullins was instrumental in the drive for a World War II memorial in Jenkins and she said she had become close friends with Willard Blankenship.

“If not for the men in World War II, we would not be here, and we could not be here in this country today,” said Mullins. She said that everyone should remember to honor all veterans, but added that she believes the veterans of World War II truly saved the world for democracy and are responsible for Americans and others enjoying the rights they have today. Mullins presented Willard Blankenship with a World War II veterans’ calendar and read a poem “It Is the Veteran.” The author of the poem is anonymous. 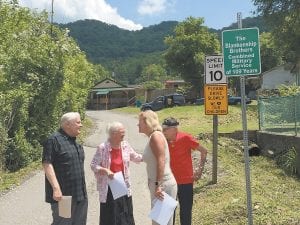 District Five Magistrate Wayne Fleming told the crowd he was honored to be there to recognize the sacrifice the Blankenship family had made to their country. Fleming represents Jenkins and Burdine on the Letcher County Fiscal Court, and is a veteran of two tours of duty in Vietnam. He said he had been in Vietnam the same time as his late brother, Frank, and had been able to spend some time with his brother while they were serving there. Frank Fleming served in the U.S. Army for 25 years and served three tours in Vietnam. 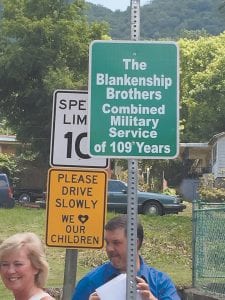 Fleming called the Blankenship brothers “ true American heroes” and he told the crowd that if not for the sacrifices made by veterans like the Blankenship brothers, we would not have the rights that we enjoy today and would not be able to gather to honor our fallen veterans. Fleming said the obituary for Bennett Blankenship had touched his heart and he would have been honored to serve under him. He added that he had met Willard Blankenship several years ago and had become close friends with him. He added that World War II veterans are almost gone now.

Jenkins Mayor Todd Depriest also spoke, and said that the brothers could have stayed at home to work in the coal mines (coal mining was seen as essential to the war effort and many miners qualified for a deferment, whether they chose to accept it or not). However, Depriest said they had chosen to serve their country and thanked the brothers and all veterans on behalf of the City of Jenkins. Councilman Rick Damron brought a certificate of appreciation from the city for Willard Blankenship.

Judge/ Executive Jim Ward read a proclamation from the fiscal court to name the road for “The Blankenship brothers, a true band of brothers.” Ward was joined by 94th District State Representative Leslie Combs, who said she was there to honor “the wonderful Blankenship brothers, who were all born in Burdine and served a total of 109 years, in World War II, Korea, and Vietnam.”

“ Not many families can say that,” said Combs. She said she also wanted to extend the regards of 29th District State Senator Johnny Ray Turner, who represents Letcher County in the Kentucky Senate. She also welcomed the visitors and family members who had traveled to Burdine to honor the brothers.

Following the speakers, Willard Blankenship took the cover off the road sign, which reads, “The Blankenship Brothers, Combined Military Service of 109 Years.”