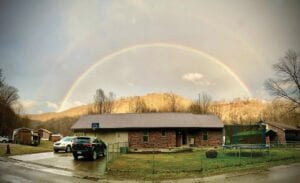 A SIGN OF BETTER THINGS TO COME? — Mountain Eagle contributing reporter/ photographer Chris Anderson captured this image of a magnificent double rainbow over his residence in Jenkins on New Year’s Day following rain showers in the area. His wife, Debbie Anderson, spotted the double arches and said she hopes the event is a sign of better things to come in the new year. (Photo by Chris Anderson)

A project to replace water lines damaged by mining in the 1990s at Marshalls Branch is now complete and cleanup is underway.

The work was funded by a bond forfeited by the coal company, and allowed for Jenkins to move forward with extending new lines to the area. The project was named the Left Beaver Mineral Project, for the Left Beaver section of Marshall’s Branch.

At January meeting of the Jenkins City Council, Paul Nesbitt of Nesbitt Engineering, who works with the city on infrastructure issues, said that the project to replace leftover lines from the Jenkins Water Line Renovation is likely to begin January 15.

Nesbitt added that the replacement of two bridges in Jenkins on Highway 805 will go to bid in January. He said he has spoken to one of Transportation Secretary Jim Gray’s assistants concerning the sidewalk project, to extend the sidewalk from the Jenkins football field to Jenkins High School, and was told there is no reason it cannot move ahead. Nesbitt also said the state will receive $100 million for sewer projects for work in Appalachia. He said the grants will require a 65/35 match, and Appalachian Regional Commission money can be used as matching funds.

Mayor Joe Depriest reported that he is working on obtaining funding to renovate City Hall, including roof repairs and putting in an elevator so meetings can be held in the upstairs board room. He said he expects to file a proposal for a Community Development Block Grant for the work.

Georgetown accountant Rodney Welch, who regularly prepares the audit for the city, delivered the audit by Zoom meeting for Fiscal Year 2020. Welch said that the city has a total of $75,000 in its General Fund, up from $58,000 last year, but is down by $47,000 in the Utility Fund. The Utility Fund also has a $101,000 decrease in its debt.

The General Fund revenue is down overall by $75,000. Insurance premiums are up by $165,000, and total reserves stand at $1,103,000. Operating funds for Water and Sewer stand at $1,557,000. The insurance for city employees created a debt of $116,000, all of which was paid over the course of the year. The city regularly borrows money from a local bank to pay for insurance to avoid paying interest and pays the loan back during the year.

Welch added that a significant amount of debt held by Kentucky Infrastructure Authority was forgiven and the remainder of $1,300,000 carries a very low-interest rate. He said he was told that the highest month of water usage is usually in January or February and the increase is attributed to people warming their water for showers.

Mayor Depriest said the city is just treading water financially, and he hopes it can continue until conditions improve. He urged citizens to wear masks, wash their hands and maintain social distancing. He added that he hopes people will take advantage of COVID-19 vaccines when they become available. The meeting was held on a Zoom conference call, but was the first Zoom meeting that was televised on cable access television.

Council members Shaun Collier, Chuck Anderson, Sammy Elswick, Garnett Bentley and Ernestine Hill were sworn in for a new term by Letcher County District Judge Kevin Mullins, who is a native of Jenkins. Long serving member Rick Damron did not attend the meeting and will be sworn in later.