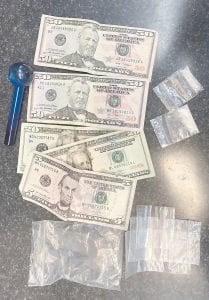 Pictured above are cash, drugs and paraphernalia confi scated from an Ermine apartment this week by the Letcher County Sheriff ’s Office.

While it is still a long shot, it is possible that Jenkins may become the home for a center doing research on the uses of industrial hemp.

The subject was one of several informational items the council discussed at its October meeting, which became an informal session rather than a regular business meeting when the council could not convene a quorum. Although the council did not have a quorum (the required number of members present to do business), Mayor Todd Depriest asked the council to stay for several reports and said any votes or official business could be taken care of at the November meeting.

Depriest told the council he has met with some hemp developers to discuss the possibility of growing legal hemp in the area. He said he hopes they could attract a federal research facility that would look at the many uses of hemp. Hemp was once a staple crop in Kentucky with the fiber in the stalks as the main resource. Hemp is not marijuana, although it is in the cannabis family. It contains a minimum level of THC, the active element in marijuana, but it doesn’t have enough to make anyone high. In recent years, the state legislature has relaxed some laws regarding hemp, but it is still a Schedule I drug in Kentucky and anyone wishing to grow hemp legally will require a license issued by the Kentucky Department of Agriculture.

In March of this year, Kentucky’s Senior Senator Mitch McConnell introduced a bill to legalize the production of hemp nationally. In his remarks at a press conference announcing the bill, McConnell said, “We are all so optimistic that industrial hemp can become sometime in the future, what tobacco was in its past.”

McConnell has long wanted to spur the hemp industry and first supported hemp in 2014 by adding a provision to the Farm Bill that he said would play “a foundational role” in Kentucky’s agricultural heritage. There are a few large hemp growers in Kentucky and a few government research plots. If McConnell’s bill passes, states will be allowed to set their own regulations regarding hemp and researchers will be able to apply for Department of Agriculture grants to study hemp.

City Manager Benny Mc- Call also presented a slideshow detailing recent progress on removing blighted and deteriorated properties in the city and on efforts to deal with the ongoing problem. McCall emphasized the need to clean the city up to present a positive face to new families who might view Jenkins as a good place to live.

McCall told the members present that with the possible influx of new residents into Letcher County from industrial development in Pikeville and from construction on the new federal prison in Roxana, there will be a significant number of opportunities to attract new families. He emphasized that it is imperative for Jenkins to be as clean and welcoming as possible, but he added that the city faces a number if issues with some of the most dilapidated properties.

McCall said the issue of ownership sometimes creates problems with multiple heirs who have left the area and dispersed across the country. However, he said the city has begun to take action to condemn property and claim the expense of cleaning it up and demolishing unsafe structures by filing a claim to recover expenses against the property in the form of a lien that will give the city the right to claim the property. Mc- Call said that even the most basic cleanup, cutting grass and weeds, is expensive and estimated the cost for basic cleanup at $150.

McCall gave out copies of notices that have been issued to people who have blighted properties informing them that they will be charged a minimum of $150 for cleanup efforts by city workers. The notice informs property owners they are being prosecuted under Nuisance Ordinance 92.03 and that they will be allowed seven days to clean their property up before the city takes charge.

In his slideshow, McCall showed several properties that ranged from extremely overgrown to several that were dangerous to enter due to eminent collapse. He showed one house at Railroad Hill that had weeds reaching to the roof and another at Mudtown where the roof had collapsed. He said city workers had taken the front porch off after it collapsed. Other sites in various parts of the city had similar issues and results.

McCall said there have been some successes, pointing to several properties that have been purchased and cleaned up, some with new homes built on the lot. Others have been cleaned up by city workers and the lots have been sold. A few have been cleaned up by the owners. He added that one lady had initiated a lawsuit against one of her neighbors for having a dangerous nuisance so close to her home. McCall said the ideal situation is to have a property back on the tax rolls with a new family living there, but other smaller successes have helped as well.

The David A. Zegeer Coal- Railroad Museum in Jenkins will celebrate its 20th anniversary with an open house on October 6 between 2 and 6 p.m. City Attorney Randall Tackett, who is on the museum board of directors, said that the museum has outgrown its space with new collections coming in regularly, and invited the public to attend.

Mayor Todd Depriest announced that the city’s annual Halloween Safe Night will be held on October 31 at the city park, although the site may be changed in the event of rain. The time is to be determined. Depriest also said he is continuing to work with the University of Kentucky’s Community Economic Development Agency of Kentucky to explore business opportunities that will revitalize the downtown area and attract visitors. He said they have discussed quality of life issues and niche opportunities for businesses aimed at tourists.

Depriest also said that although they are in the very early stages, there have been several inquiries into the possibility of locating other businesses at the Gateway Industrial Park. He said he is unable to give any more information, but the interest centers mainly on the abundance of energy available at the park, including electricity and natural gas. He also said the Hunt Brothers Pizza building will be ready for business within the next month.

The Jenkins Police Department issued eight citations in September and seven warnings. Officers made 10 arrests. Three were from warrants, one for DUI, three were drug related, and four were for domestic violence. They also issued two summonses, answered two collisions with injury, and six without injury. Officers also made four motorist assists.

The city produced 11,907,000 gallons of treated water in September and sold 9,895,000 for a difference of 2,012,000, a potential loss of 17 percent. Of that amount, 804,000 gallons are accounted for including 250,000 gallons in flushing fire hydrants and 442,000 gallons in cleaning the water plant. This leaves the city with an unaccounted-for loss of 1,208,000 gallons, or ten percent of total production. Kentucky Rural Water counts water losses under twenty percent as an acceptable number.