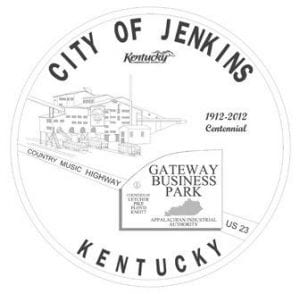 This new logo for the city of Jenkins was unveiled Monday night during the Jenkins City Council’s July meeting. The logo was designed by Letcher County native Jill White.

Water customers in the City of Jenkins who obstruct, tamper with, or damage city water meters will soon be subject to tougher penalties.

At its July meeting Monday night, the Jenkins City Council approved the first reading of an ordinance designed to strengthen the rules against tampering with the meters.

The first reading of the ordinance was conducted by City Attorney Randall Tackett, who said the city’s present water ordinance was not well crafted and needed to have a number of revisions to clarify and strengthen it.

The ordinance will be read for a second and final time at the council’s next meeting. If it gets the council’s final approval it will then become law after being published in The Mountain Eagle.

The city council this week also addressed a nuisance caused by Canadian geese which have taken up residence at Elkhorn Lake, the city’s water reservoir, and are posing a health problem with their droppings on the sidewalks along Lakeside.

Mayor Charles Dixon told the council he has spoken with the Kentucky Department of Fish and Wildlife, which recommended that the birds’ nests be removed. Dixon said wildlife officials said the missing nests should cause the geese to leave and continue their usual cycle of migration.

The council also had its first viewing of a new City of Jenkins logo which will be used in conjunction with the Jenkins Homecoming Festival in August. Jill White, a designer and artist with Nesbitt Engineering, was on hand to unveil the logo, which features the old Consolidation Coal Company preparation plant at Dunham.

White is a former resident of Letcher County and was raised at Ulvah. Council member Rebecca Terrill said the logo will be featured on Homecoming Festival T-shirts.

In other business, the council heard a report from Letcher County Recycling Coordinator Gary Cornett about the city’s participation in the county’s Blue Bag recycling program.

Cornett told the council that in the past year, 148 tons of paper, plastic, and aluminum cans alone have been recycled in Letcher County as a whole. He said there is no way at present to accurately determine each city’s contribution to the recyclables, but estimated that Jenkins accounted for about one-third of the tonnage.

“I wish I had more solid numbers,” said Cornett. “But we empty the recycling bin in Jenkins four times a week. We get Whitesburg once a week and Fleming Neon twice a week.”

Cornett also told the council the fiscal court has received a $41,000 grant to purchase new equipment for the recycling center. He said the money will be spent on a new forklift, a paper cutter, a new bailer, and a more powerful shredder. He said he hopes the center can make shredding documents a bigger part of its business and hopes to take sensitive documents from hospitals, schools, etc., for shredding. Cornett said the recycling is a bit down since school has been out, but is still going well. He complimented Jenkins Independent Schools on their recycling efforts as well.

“Jenkins (Schools) does a good job,” said Cornett. “Most of the elementary schools in the county do really well, too. We’re having a little problem getting the high school though.”

Mayor Dixon estimated that each ton of garbage costs the city about $80 to take to the landfill, so the savings from recycling are substantial.

Utilities Commission Chairman Ked Sanders reported to the council that he has been conducting a survey in the city on Dumpsters and garbage collection at city businesses in an effort to restructure the rates. Sanders said Jenkins Sanitation Department worker Scotty Church has helped him conduct the sur- vey, and that the results are surprising. He said there are so many irregularities in the rates there was essentially no rate structure.

“I did a survey with Scotty and learned we just don’t have accurate information to work with,” said Sanders. “If we had we could have just added six and a half percent, but we don’t.”

Sanders said he and Church are doing the survey in cubic yards per container and will base garbage fees on the amount each container holds and the number of times each week it is picked up. He said there will be some allowances for the type of business being conducted because some businesses may put out heavier garbage than others.

Water Department Superintendent Bo Hopkins reported that water losses were down for June, to 24 percent for unaccounted losses. Hopkins told the council he had to use a good deal of water to flush hydrants because of “brown water” in the system so losses accounted for were up. He said Kentucky Rural Water told him the brown water is the result of a “bio film” that collects in the old cast iron pipes and when the chlorine and other water treatment kills the bacteria, it turns the water brown. Hopkins said flushing the hydrants takes care of the problem.

Grants consultant Brian Kirby, who has been hired by the city to prepare an application for Community Development Block Grant to replace old city water lines, said the bio film situation will actually help the city when the grant applications are examined in Frankfort. He said it will further establish need and the city with the worst problems usually gets the grants.

Continued questioning from council member Terry Braddock about an account to manage several properties the city owns and rents out prompted a heated response from Mayor Dixon. Despite assurances otherwise by City Attorney Tackett and City Clerk Sherry Puckett, Braddock continued to insist that the account, which he referred to several times as a slush fund, be listed with the monthly financial report. Tackett told Braddock the account contains revenue from rental properties and is used exclusively for the maintenance of the properties. He said it is listed in the city’s annual audit as well as the annual budget and is on file for public viewing. But Braddock persisted and made a motion that it be included in the monthly financial report.

“Let me make this real clear,” said Dixon. “I don’t have a slush fund. This was here when I got here. I’m not keeping any money and I’m not trying to take anything. You are accusing me of stealing.”

Tackett told Braddock the money in the account is earmarked specifically for maintaining the properties and draws interest until it is needed. Terrill agreed and said the money can’t be used for anything else except to take care of the properties. Braddock’s motion died for lack of a second.

In his mayor’s report, Dixon thanked committee volunteers who have been helping the city in a number of ways. Dixon reported that Sarah Brown and Jim Polly were named “Unsung Heroes” at a recent Letcher County Chamber of Commerce meeting. Dixon also pointed to the continued need to keep the city clean and to try to beautify it as much as possible. He said the dilapidated properties were a huge problem and the city will continue its efforts to remove them.

• Police Chief James Stephens reported the Jenkins Police Department responded to 139 complaints in June and made 23 arrests. Six of the arrests were drug related, five resulted from warrants, and two were DUI arrests. The department responded to four domestic violence complaints, one injury accident, three non-injury accidents, and made five motorist assists. Stephens said he had received several compliments about the way Officers Maggard and Miller handled recent complaints and gave Sgt. Adam Swindall praise for recent investigations resulting in the prosecution of two burglary suspects. He also reported that the Jenkins Police Department will continue its efforts to enforce the city sticker ordinance.

• Dixon reported receiving a letter from U.S. Senator Jim Bunning’s office offering assistance in contacting the U.S Army Corps of Engineers about the problem with water lilies in Elkhorn Lake.