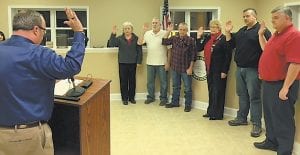 Letcher Circuit Judge Jimmy Craft conducted a swearing-in ceremony for the six members of the Jenkins City Council at their December meeting. All six were re-elected to their office in November, and no new members were added.

Toni Jenkins, Garnett Bentley, Rick Damron, Mike Dingus, Chuck Lewis, and Rebecca Amburgey all swore to uphold the Kentucky Constitution, and swore that they have never fought or participated in a duel.

Although there have been several attempts to have the dueling clause removed from the oath of office, they have failed and all state officeholders in Kentucky must swear they have never participated in a duel. Several other states have had such a requirement, but it is believed that Kentucky is now the only state to have this requirement in its oath of office.

Dueling was relatively common in the American South before the Civil War, but the most famous duel in American history was held in New Jersey and resulted in the death of Alexander Hamilton, who died following a duel with Aaron Burr.

In other business, the council learned that a line at Haymond connecting the city’s water lines with lines belonging to the City of Fleming-Neon will be finished soon. Ken Reid of Nesbitt Engineering, which works with the city on water and sewer projects, told the council that about twothirds of the meters have been installed and he expects lines to be tested in December. He added that many people in the new service area are enthusiastic about getting treated water and the city will be able to pick up as many as 23 new customers.

The council voted to purchase $25 gift cards from the Fleming-Neon IGA store to give to city employees for Christmas, and voted to sell a parcel of land in Dunham for $1,000. The land had been obtained under the Blighted and Deteriorated Property Ordinance and had been bid twice, but no bids were offered. Mayor Todd Depriest said a property owner whose property borders the lot made the offer and he recommended accepting it to get the property back on the city tax rolls.

Rebecca Amburgey commented that the city’s Christmas Parade had been very successful and Depriest said he particularly liked having floats and praised the American Legion, churches, and other groups which built them. He also complimented the Jenkins Police Department, volunteer fire department, and the city employees who worked to make the event successful.

Councilman Rick Damron said he is very pleased with the new mural at the entrance to the city from US 119 behind Jenkins High School.