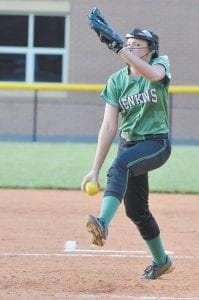 What began as a tense game turned into a 16-5 rout by Jenkins when the Lady Cavaliers met the Letcher County Central Lady Cougars last week in a 53rd District and 14th Region matchup.

In the bottom of the third inning, the first two batters for LCC reached base as Jenkins committed two throwing errors. Seanna Coots got an infield hit scoring courtesy runner Alexis Cornett. Cheyenne Stidham walked, scoring Carlie Combs. Emily Stidham hit a fielder’s choice to score Coots, the scored herself on a passed ball to give the Lady Cougars a 4-0 lead.

In the top of the fourth inning, Jenkins shook off the case of nerves and came back strong as Caitlynn Estevez led off with a double to center and Charity Niece brought her home with a triple. After Taylor Johnson drew a walk, Makayla Seals singled to score Niece. After Melissa Bartley drew a walk to load the bases, Johnson scored on a passed ball before Lexi Stambaugh cleared the bases with a double to center. Whitney Creech followed with a double to score Stambaugh, pushing Jenkins to a 6-4 lead after four innings. The Lady Cavs sent 11 batters to the plate during the inning.

In the fifth inning, the Lady Cavs started where they left off as McKenzie Gibson hit a single and Taylor Johnson and Makayla Seals were both hit by pitches to load the bases. After Lexi Stambaugh singled to bring Gibson home and Whitney Creech drew a walk, LCC coaches replaced pitcher Makaley Johnson with Cheyenne Stidham. After Mercedes Boggs reached base on an infield hit that scored Seals, Caitlynn Estevez hit into a fielder’s choice to score Stambaugh, and Charity Niece singled to right to score Boggs.

In the bottom of the fifth, Cheyenne Stidham drew her third walk of the game and scored when Emily Stidham doubled to left, giving the Lady Cavs an 11-5 lead after five innings.

In the sixth inning, the Lady Cavs loaded the bases again when Makayla Seals singled, and Melissa Bartley and Lexi Stambaugh drew walks. LCC once again made a pitching change, bringing Makaley Johnson back to the mound. Johnson was greeted with a single by Whitney Creech, driving in Seals and Bartley. A throwing error during the play also enabled Stambaugh to score. Creech and Katie DePriest, running for Estevez, scored on a fielding error to make the final score 16-5.

The Lady Cavs had 16 runs on 12 hits. LCC had five runs on four hits. Caitlynn Estevez picked up her 16th win.