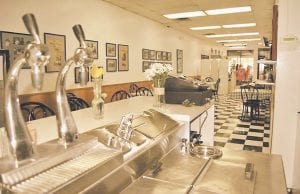 JENKINS LANDMARK REOPENS — The Cavalier Drugstore in Jenkins is again cooking breakfast, lunch and dinner five days a week after being closed for three years. The drugstore and café were founded in 1945 and moved to their current location on Main Street in September 1952. (Photo by Renee Hodges)

The city of Jenkins regained one of its favorite old gathering places this week with the reopening of a café that was in business for nearly 68 years before it was closed three years ago.

The Cavalier Drugstore & Café on Main Street officially reopened for breakfast at 7 a.m., Wednesday. Large crowds — including some customers who said they would be driving to Letcher County from as far away as central Kentucky — were expected for the first servings of lunch and dinner at the newly decorated Main Street establishment, which is now under the ownership of pharmacist Jay Graham, of Coeburn, Va., and his wife, Jenkins native Kristi Bentley Graham.

“It’s going to be busy, but it’s going to be good,” Mr. Graham, 41, said Tuesday while restaurant employees were busy practicing their cooking skills on grills and deep fryers that remain from the café’s past.

According to a history of Jenkins, the Cavalier Drugstore was originally located in East Jenkins, but was moved to its current downtown location in 1945, after original owners Laurence and Nina Bartley sold the business to Joe and Mary Eversole. It quickly became known as an afterschool hangout for students attending the old Jenkins High and Elementary School, which was then located nearby, and for serving some of the best hotdogs and milkshakes in Letcher County. It also became known for its display of historic photographs of the town of Jenkins, which was built in 1912 by Pennsylvania based Consolidation Coal Company.

“We have the same pictures on the wall; we’re using the same tables and chairs — even the same phone number,” said Graham, who has operated the pharmacy for about a month while he’s in the process of purchasing the business from David Powers, the store’s former pharmacist.

In addition to standard fountain fare such as Cherry Coke and hand-dipped milkshakes, the café’s menu features items that honor the store’s long history. Breakfast customers can purchase “The Butch Boggs Big Breakfast,” named in honor of former pharmacist Wendell “Butch” Boggs, who owned the store until a few years ago, while lunch and dinner customers can order a hotdog topped with “Joe Eddie’s Famous Chili,” which is named in honor of Joe Eddie Eversole, who, with his wife Jo Ann, returned to Jenkins from Lexington in 1965 to help manage the store his parents owned.

The menu also honors present-day Jenkins with “The Creech Burger,” which is named for Jenkins High School girls’ basketball star and Kentucky’s all-time scoring leader Whitney Creech, whose No. 5 practice jersey hangs on the wall above a table that is also named in her honor.

Graham said the public’s reaction to the café’s reopening has been “phenomenal,” adding that some former Jenkins residents have said they would be driving back to town to experience Wednesday’s event.

“They’re driving in from Lexington and Frankfort tomorrow,” he said Tuesday afternoon.

Graham said his wife’s mother, Tammy Adams of Jenkins, is assisting with the reopening.

“We feel it’s a historical landmark that’s been missed,” he said.