Jenkins falls in nail-biter against Pineville, 36-28 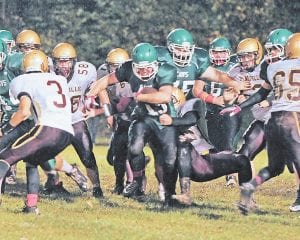 Jenkins’s Andrew Oliver broke free from the pack while rushing the ball in the Cavaliers’ close loss to Pineville. Jenkins, coming off a win over Knott Central, fell 36-28. (Photo by Chris Anderson)

The Jenkins Cavaliers, coming off a big win at Knott County the week before that led to JHS player Andrew Oliver being named WYMT-TV’s player of the week, marched into last Friday night’s game against the Pineville Mountain Lions hungry for their first home win of the season. As the rains fell, the game started with a defensive show by the Cavs that led to a turnover on downs by Pineville.

After the Cavalier offense was unable to convert the opening possession into a score despite impressive runs by Audie Fields and Andrew Oliver, the Mountain Lions were able to convert their next two possessions to scores thanks to a fumble recovery and good field position. The first half ended with a 14-0 Pineville lead.

Cavaliers’ running back Andrew Oliver distracted the Mountain Lions’ defense, allowing Jenkins quarterback Randy Potter to complete a 20-yard bullet pass to Devin Kendricks to put the Green in scoring position. Another short reception to Senior Jordan Delph set up Potter for a quarterback keeper for the score. Oliver was successful on the two-point conversion to put the Cavaliers on the board.

From there the Cavaliers went into overdrive, forcing a Pineville fumble and recovery for a 70-yard return and touchdown by Oliver. A successful two-point conversion closed the scoring gap to 22-13. The Green defense made an impressive stand on the next Pineville possession, holding a goal line stance through three downs with the Lions finally going in for the score on fourth down. A bobbled snap on the two-point conversion led to a Cavalier recovery.

With time running down, Jenkins pounded the ball down the field to set up another score by Oliver to close the deficit to 28-21 with less than four minutes to go in the fourth quarter. The Pineville offense took the field looking to cap the game, but were stopped by a Cavalier defensive show that forced another Mountain Lion fumble, this one recovered by Jenkins lineman John Holyfield.

Cavaliers quarterback Randy Potter showed off his versatility by running, passing to Delph and playing receiver to Oliver’s passing skills. Potter capped the drive by running for a touchdown. The successful two-point conversion tied the game with less than two minutes to go.

The Jenkins defense took the field with a strong presence, but could not stop the pass on fourth down in the final seconds as Pineville won, 36-28.

Jenkins finished with 205 yards rushing and 83 yards in the air. The defense was led by Coty Wright with nine tackles, followed by John Holyfield with six tackles and a fumble recovery.

On Friday, the Cavaliers will play Hazard for Senior Night. Kickoff is set for 7:30.