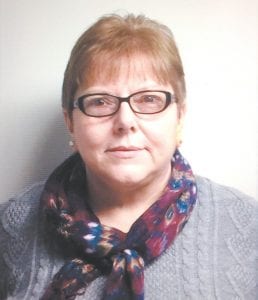 Alicia Gail Cook is the “Outstanding Friend of Jenkins” for the 2018 Jenkins Homecoming Days Festival.

Alicia Gail Cook will be honored as the Outstanding Friend of Jenkins at the Jenkins Homecoming Days Festival scheduled for August 23-25.

Mrs. Cook attended Whitco Grade School, Whitesburg Grade School, and Whitesburg High School. She is a graduate of Berea College where she earned a Bachelor of Science degree in the nursing program in 1979. She received a Master’s Degree of Science in nursing as a gerontological clinical nurse specialist in 1989, and completed the postmaster’s certificate program as a family nursing practitioner at the University of Kentucky in 1996.

In addition to caring for patients at Jenkins ARH Family Care, she is a licensed diabetic educator, examines victims of sexual assault and domestic violence, and has cared for inmates at the Letcher County Jail one day a week since 2006.

Mrs. Cook is a member and music leader at Colson Baptist Church, a member of Letcher County Domestic Violence Multi discipline Committee, and is the secretary and a past president of Whitesburg Lions Club.

She is married to Wendell Lewis Cook and has two children, Brian Archelaus