Jenkins football cancels its season again, after roster is reduced to nine 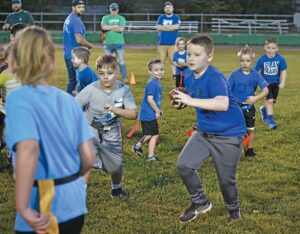 Christopher Anderson Jr, a fifth-grade student, runs the ball in a recent flag football game. “We’ve got our peewee (flag football) program running now and if we keep that going, we should have enough players to have a consistent football program in the future,” said Jenkins Athletics Director Ashley Addington-Congleton.

A lack of players has forced Jenkins High School’s football team to cancel the remainder of its schedule for the second time in three years.

The Cavaliers football team began this season with 19 players on its roster. After losing all of its first three games — to Harlan and Jackson City at home and to Betsy Layne on the road — more than half the team quit. Jenkins Athletics Director Ashley Addington- Congleton said it was time to throw in the towel with only nine players still willing to compete.

When the Cavaliers hosted Harlan on September 2, it was the first football game in which Jenkins had competed in nearly two years after the team was dissolved two games into the 2019 season. Jenkins did not field a high school team in 2020.

Addington-Congleton applauded first-year coach Ryan Turner’s efforts to keep the program operating and said Turner is already working toward building a team for next season.

“ Coach Turner has shown dedication to the program, and he’s exhausted all resources to keep the season going,” she said. “He’s already working to build interest and get kids grades eight through 11 to come out next season.”

The Cavaliers had four games remaining on their 2021 schedule. They were scheduled to host Montcalm, West Virginia, this Friday before traveling to Floyd Central Oct. 15. The Cavaliers were set to round out their season by hosting Twin Springs, Virginia, on Oct. 22 and wrapping up on the road Oct. 29 at Unaka High School in Elizabethton, Tennessee, near Johnson City.

Jenkins did not take part in district play and would not have participated in any postseason games. Coaches and volunteers are currently operating a flag football league with Jenkins Elementary students in hopes of building interest in those students to eventually suit up for the Jenkins Middle School football team and, later, the high school team. The flag football program drew about 40 players at sign-up.

“It’s going to take us a while to funnel kids back into the system,” Addington Congleton said. “We’ve got our pee-wee (flag football) program running now and if we keep that going, we should have enough players to have a consistent football program in the future.”