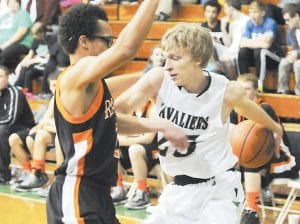 CREATING SPACE — Senior forward Jeffery Newsome used his elbow to make room between himself and a J.I. Burton High School defender during the Jenkins Cavaliers’ 53-48 win over the Norton, Va., team on January 21. The victory was the Cavaliers’ fourth of the season and their first since December 9. A 76-60 loss to Jackson High School on January 23 dropped the Cavs’ record to 4-12 entering play this week. (Photo by Chris Anderson)