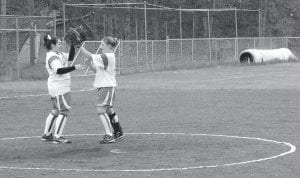 Since the opening of Letcher County Central High School in 2006, the annual series with the Lady Cougar softball team and the Lady Cavs from Jenkins High School has developed into a very passionate and hotly contested rivalry.

These two teams stoke the competitive fire in each other and their games are always competitive, spirited and fun to watch. The latest installment in the series played on April 30 in Whitesburg was no exception. The game featured four lead changes in the first two innings and was tied 4-4 after three innings. The Lady Cavs went on to break the tie, scoring one run in the fourth inning, one run in the fifth inning, and two runs in the seventh inning to claim a big district win over their arch rival and even the series at five wins apiece.

The Lady Cavs scored first in the top of the first inning as shortstop Emily Walker lined a double to the gap in right center field and later scored on a base hit by catcher Hillary Brashear. The Lady Cougars countered with two runs in the bottom of the first to take a 2-1 lead. Shortstop Chloe Wynn led off with a line drive single to centerfield and then scored as left fielder Lisa Frazier smacked a double that rolled to the outfield fence. Third baseman Micca Boggs followed with a base hit that scored Frazier from second. Lady Cav pitcher Rachel Thacker then rallied and struck out two Lady Cougar batters to end the inning.

The Lady Cavs played small ball in the top of the second inning to retake the lead by a score of 3-2.

Third baseman Kayla Stambaugh reached base on a bunt single followed by centerfielder Ali Goff, who also hit safely with a bunt single. Stambaugh went from first to third on Goff’s single and as the Lady Cougars then threw to third in an attempt to throw out Stambaugh, Goff advanced to second leaving runners on second and third with one out. Stambaugh scored on a single by designated hitter Sierra Kiser and Goff later scored on a single by second baseman Sarah Belcher.

The Lady Cougars rallied to again come from behind and reclaim the lead with two runs in the bottom of the second inning. Catcher Kayla Burton reached base on an error to lead off the inning and scored as Wynn doubled for her second hit of the game. An error on second baseman Tekiah Caudill’s ball hit to right field scored Wynn and put the Lady Cougars back in the lead 4-3.

The Lady Cavs fought back to tie the score 4-4 in the top of the third inning as Brashear lined a double to left field to lead off the inning and then advanced to third as second baseman Brooke Webb reached on an error. Brashear tagged at third and scored as Stambaugh hit a deep fly ball that was caught for the second out by Lady Cougar centerfielder Courtney Johnson.

Thacker got off to a rocky start for the first two innings then settled down and held the Lady Cougars scoreless the remainder of the game with only one Lady Cougar batter reaching base safely in the final five innings. The Lady Cavs took the lead for good with a two-out rally in the top of the fourth inning as Walker singled and scored from first on Brashear’s third hit of the game. The Lady Cavs also added a run in the top of the sixth inning as pinch hitter Lesha Fleming lined a single to right field and then scored as the Lady Cougars committed errors on ground balls hit by Walker and Brashear.

Two more insurance runs were added in the top of the seventh inning as consecutive singles by senior Whitney Gibson, Stambaugh, and Goff loaded the bases with no outs. After Thacker reached first on a fielder’s choice with Gibson thrown out at the plate, Stambaugh scored on a successful sacrifice by Kiser. Goff also was thrown out at the plate on a ground ball by Belcher with Thacker advancing to third on the play. Thacker then scored the game’s final run on a passed ball, resulting in the final score of 8-4 in favor of the Lady Cavs.

The victory gave the Lady Cavs bragging rights in the rivalry for at least a week. The two teams will line up and take the field for the rematch to be played in Jenkins at 5:30 p.m. tonight (May 6).

The Lady Cavs will also play Hazard at home on May 5 and will travel to Jeffersontown to represent the 14th Region in the All A State Tournament on May 8 and 9.

After the rematch with Jenkins, the Lady Cougars will entertain the Cordia Lady Lions at home on May 7 and will travel to Hazard to participate in the Mountain Sports Leader Classic tournament on May 8 and 9.