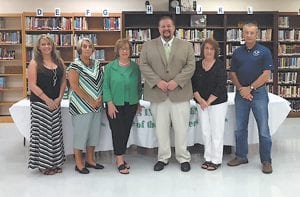 After a long and meticulous process of identification, interviews, and finally, tendering an offer, the Jenkins Independent School System has a new superintendent.

At a meeting called to announce the position and to conduct the regular monthly business for June, the Jenkins Board of Education offered a contract to Mike Genton of Trimble County Schools to serve as superintendent of schools in Jenkins. Genton’s appointment will become effective on July 1, when he will assume the duties of superintendent. Acting Superintendent Eddie Whitaker will resume his duties as principal of Jenkins High School.

Whitaker had hardly settled into his position as principal last fall when Superintendent Freddie Bowling resigned to accept a position with Pike County Schools, and Whitaker became acting superintendent. At that time, math teacher Thomas Pinion, who like Whitaker had only recently been hired (in June of 2015), assumed the duties of acting middle/high school principal. Pinion will return to his duties as a high school math teacher.

Genton told the board he has worked in education for 21 years, and for the last 17 years with the Trimble County System. He said he has served as a teacher, a coach, assistant principal, and principal, and added that he is very appreciative of the opportunity to serve the students of Jenkins.

“I hope to be a servant/ leader, and make the district competitive with the other districts in the region,” said Genton. He later added that he is a graduate of Campbellsville University, and added that he will be happy to sit down for an interview and discuss his plans and hopes for the Jenkins School System.

Board Chairman Tracy Goff expressed his sincere thanks to everyone, including the steering committee and others who had participated in the superintendent search and in all the steps of what he called a tedious hiring process. He said that following the board’s interview with Genton, it tendered an offer and that Genton had accepted it. Goff then made a formal motion that Genton’s contract be approved and the board voted unanimously to approve the motion.

Jenkins High School football coach Matt Fleming attended the meeting and told the board he has seen a good turnout already in non-mandatory open field workouts at the Tommy Brush Football Field. He said players are also working out during the summer by lifting weights and other activity on their own. Mandatory practice authorized by the Kentucky High School Athletics Association, will begin in three weeks.

Fleming also told the board that this year’s uniforms will be either all green or all white, with no black trim. He said the team may mix white pants with green jerseys for home and away, and that the Jenkins logo is written in cursive on the jerseys. He said a fundraiser for the team will be held on July 23 and will probably feature flag football.

On August 6, the team will hold a “Meet and Greet the Cavaliers”, which will lead up to a free open kids’ football camp. Board Chairman Goff told Fleming that since the June 23 meeting was technically a special meeting, and the two actions were not on the agenda, the board would have to formally approve them later.