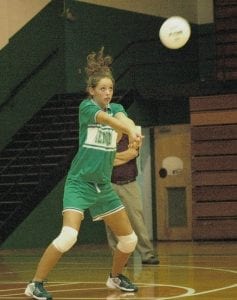 JENKINS GETS WIN – Nicole Revis of Jenkins High School is pictured here recently returning a shot during the Lady Cavaliers’ 2-1 win in volleyball against Knott County Central, the team’s first ever in the sport. The Lady Cavs dropped the first set 17-25, but came back strong to take the next two, 25-20 and 25-19. The Jenkins volleyball program was originally started in 1998 and lasted only one season without netting a win. The new team was formed after a school survey showed an interest in the sport for females, who had no other sport available to them during football season. The Lady Cavs began their season a bit later than other teams and are playing a limited schedule this year, but will be allowed to play in the district tournament at the end of the season. The team is coached by April Damron Charles and Gina Seals-Sparks. (Photo by Chris Anderson)