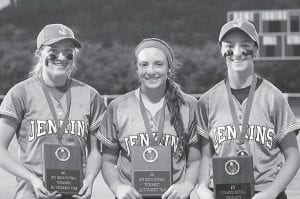 Named to the All-14th Region Tournament team from Jenkins were, from left, Whitney Creech, Caitlynn Estevez and Lexi Stambaugh.

The Jenkins Lady Cavaliers played in the first round of the 14th Regional Tournament at Perry County Central High School. They faced Powell County in the first game of the day.

In the bottom of the first inning, Whitney Creech led off with a single to center for Jenkins and moved to second on an error. Lexi Stambaugh followed with a double to center to score Creech.

Gibson then moved to second on a passed ball and Taylor Johnson got on from an error to load the bases. Whitney Creech got a hit and scored Niece for a 5-0 lead.

Powell County added a run back when Whitney Cook singled, moved to second on a fielder’s choice and scored on a throwing error.

In the third inning, Powell’s Haleigh Bauer reached base on a walk, Katie Knox had a bunt single, Makayla Rucker singled to left and Bauer scored on a fielding error. Whitney Cook walked to load the bases, and Lexie Brewer had an infield single to score Knox.

Erika Howard also had an infield single to score Rucker and cut the lead to 5-4.

In the fourth inning, Melissa Bartley got on with a fielder’s choice and scored from a Caitlynn Estevez single. Courtesy runner Katie DePriest scored from first on a double from Charity Niece for a score of 7-4.

In the sixth inning, Jenkins added four runs as Lexi Stambaugh led off with a single to center and Melissa Bartley’s bunt single sent Stambaugh from first to third.

Powell County didn’t give up the fight as Knox reached base on a walk, moved to third on two wild pitches and scored on a single from Makayla Rucker. Whitney Cook reached base on an error, as did Lexi Brewer, and Erika Howard got a walk to score Rucker.

Emily Branham walked to score Cook, and Amber Branham had a fielder’s choice to score Brewer to make the final score with Jenkins winning 11-8.