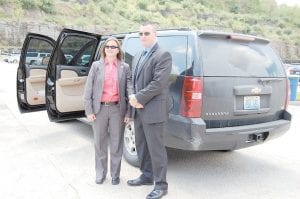 Jenkins High School graduates Kristi Sexton and Derek Hall are part of the Kentucky State Police travel detail of executive security for Gov. Steve Beshear. Sexton and Hall posed for this photo while on duty recently at the ribboncutting ceremony for the Letcher County Area Technology Center, where Gov. Beshear was the keynote speaker.

One has been rewarded with being on the floor of the Super Dome in New Orleans for the trophy presentation after the University of Kentucky won the men’s national basketball championship in April.

The other has had the honor of being selected to accompany Ken- tucky’s top officials on overseas trips to China (twice) and to India (once).

Both are graduates of Jenkins High School, and both are members of the Kentucky State Police executive security team in charge of protecting the state’s governor.

Kristi Sexton and Derek Hall are members of the travel detail for Gov. Beshear and First Lady Jane Beshear.

Sexton, a daughter of Paulette Sexton, a Jenkins Independent Board of Education member, and the late Brenton Sexton, was graduated from JHS in 1993. She attended Marshall University on a basketball scholarship. She was interested in sports medicine, but a college roommate whose father was a police officer majored in criminal justice. Sexton took a few classes and decided she, too, wanted to major in criminal justice. 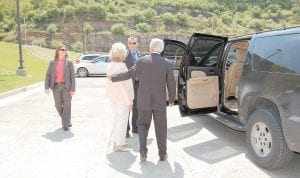 After graduating from Marshall University in Huntington, W.Va., Sexton entered the KSP Academy. She was stationed at the Pikeville post for two years before transferring to Dry Ridge in northern Kentucky. Sexton then spent two years working in Lexington as a member of the Drug Enforcement and Special Investigations (DESI East) unit. She transferred back to Dry Ridge before being assigned to the governor’s detail.

“I thought it was something interesting,” said Sexton, who had worked a legislative session and enjoyed it and is now one of two women on the executive security detail. “I liked the professionalism I saw.”

August will mark six years of Sexton being on the executive security detail.

Hall, a son of Roger Hall and Linda Gallion Sturgill, was graduated from JHS in 1988 and played football for a semester at Union College. He transferred to Morehead State University and played football there for two seasons before graduating in 1992 with a degree in government.

After graduating from the state police academy in 1993, Hall worked at the Dry Ridge post until August 1999. He was at KSP Post 13 in Hazard from 1999 until November 2010. Hall, who worked in accident reconstruction, said working fatal wrecks wore on him and he needed a change of pace.

That change came when he was transferred to executive security with Lt. Gov. Daniel Mongiardo until Mongiardo’s term ended in December 2010. Mongiardo, an ear, nose and throat doctor, often commuted to Frankfort from his home in Hazard.

“In the state police since I have been on, this is what I looked forward to,” said Hall. “I had been thinking about it for a long time.”

Hall still lives in Jenkins and travels to Frankfort to work a five-day week before returning home to spend his days off. Troopers have their own quarters at the Governor’s Mansion. They are also permitted to stay at the KSP academy while in Frankfort.

“It’s really interesting,” said Hall. “You do a lot of things that you wouldn’t do normally. Work is very rewarding.”

Hall’s favorite assignment this year was helping Gov. Beshear get on the floor for the trophy presentation after the NCAA men’s basketball championship game in New Orleans.

“We went to the Final Four and basically stood on the floor with them when they were cutting the nets,” said Hall. “Just being a part of that was surreal.”

Sexton, who says her job is an amazing opportunity to be a part of Kentucky history, has traveled overseas twice on economic development trips. She went to Beijing, China with former Gov. Ernie Fletcher and First Lady Glenna Fletcher shortly after Sexton was assigned to the executive security detail.

“It was pretty spectacular,” said Sexton. “I’ve gotten to travel and see things I would never get to see. It’s a real pleasure to be on the detail. It’s an opportunity not many people get.” She also traveled with Gov. Beshear to India two years ago.

“It’s hard to describe what it is like,” said Hall. “ You’ve got all of these people who are very much in need. There is so much devastation down there, you feel helpless.”

Hall said it lifted spirits of tornado victims when the governor and first lady visited.

“The governor is trying to pull every resource he can to get in there and help these people,” said Hall. “Anytime a disaster in the state happens he is there for it and we are too. You get to see all of it firsthand. It is eye opening to see all that he is a part of.”

Hall and Sexton have both worked during the Kentucky Derby at Churchill Downs in Louisville.

“It’s a very stressful day because they do a lot of moving around and a lot of the moving is in the middle of the public,” said Sexton. “It’s a lot of people in a small space. It’s so crowded. I’m very grateful to even have the opportunity to do this.”

Sexton has escorted the Beshears to the Churchill Downs winner’s circle.

“It’s pretty cool to hear the crowd roar in the winner’s circle when the horses are coming to the finish line,” said Sexton.

Hall has seen many celebrities at the Derby, but was careful not to get in their way.

They don’t really want to be bothered,” he said. “You end up saying ‘hey’ to them. Most of them are pretty nice. It is neat to be in an environment like that to see people you would normally only see on television.”

Most everyone on the executive security detail works Inauguration Day events. During this past inauguration, Sexton worked the day shift and Hall worked the night shift.

Sexton walked the parade route while the Beshears rode in a horse-drawn carriage and she stood on the stage while Gov. Beshear gave his inauguration speech.

“There was a ton of people and you are trying to make sure everything goes off without a hitch,” said Hall. “It’s nice to be a part of it.”

Hall said he never knows what he is going to be doing from one week to the next.

On April 25, he and Sexton were a part of the travel detail for Gov. Beshear at a ribbon-cutting ceremony at Ermine for the Letcher County Area Technology Center.

“It’s nice to run into people I have known for most of my life,” said Hall. “When somebody local does good, so to speak, people like to cheer you on. It’s good to get that when you can.”

Sexton said the governor has made a few appearances in Letcher County over the last couple of years that she wasn’t assigned to work and she was pleased to be at the ribbon-cutting ceremony.

“It’s cool seeing people we have known,” she said. “For Derek and I both it is pretty special. We’re both proud of Jenkins and Letcher County.”

Sexton said it is especially nice to work with someone else who is from Jenkins.

“It’s weird two of us would be from the same high school,” said Hall. “We catch each other up on the gossip back home.”

In addition to working with someone from his hometown, Hall said the Beshears make his job enjoyable.

“The governor and first lady are very personable, very caring people who are genuinely concerned about the people who surround them,” said Hall. “ They ease the tension a lot of the time. You are not always on edge. When it comes time to do their business, they do theirs and we do ours.”

“It’s an honor to work for them,” said Sexton. “They are great people. It’s a very professional relationship. They are pretty personable. They are more laid back than I expected them to be.”

“They really love the state and really want to do what is right for the people of Kentucky,” said Sexton.

Hall said his driving skills must be grade A to take the governor and first lady to and from events.

“You are hauling around the most important person in the state,” said Hall. “You have to be very mindful of what is going on.”

Hall said while on executive security detail he has to be extremely aware of his surroundings.

“ Your head is always on a swivel,” he said. “You are trained with dealing with the public. You are not always going to be dealing with happy crowds or ideal situations. Being a road trooper helps greatly.”

Hall said being on the executive security detail isn’t the everyday routine he was used to as a road trooper.

“You never know what mindset someone is going to have,” said Hall. “This is a grander scale. Every now and then you get a heightened sense.”

Sexton said she has to be ready for anything at any time.

“Things can happen at any time,” said Sexton.

Hall and Sexton both love their jobs and want to stay on the detail until they finish their careers.

“It’s a real cool job and I am glad I get the opportunity to do it,” said Hall.

Sexton said she is comfortable in the position she is in, but she knew coming into this it is a temporary position.

“I really enjoy it,” said Sexton. “I think it is a really important job to keep the governor and first lady safe. I would have never dreamed I would have gotten to do this.”