Jenkins gym floor is named in honor of Creech

Whitney Creech posed with Jenkins Superintendent Damian Johnson after the announcement. Below, Creech sits on the gym floor named in her honor. (Photos by Chris Anderson)

The basketball court where Whitney Creech became a high school superstar will forever be named in her honor.

The floor in the Jenkins gymnasium is now known as “Creech Court,” and features enlarged replicas of Creech’s signature along with a redesigned Jenkins Cavaliers logo.

Johnson also revealed during the ceremony that Creech’s jersey number “5” will now be retired and will never again be worn by another player at Jenkins. Johnson also announced that Creech will be the inaugural member of the new Jenkins High School Athletics Hall of Fame and presented her with a replica plaque detailing her many accomplishments. 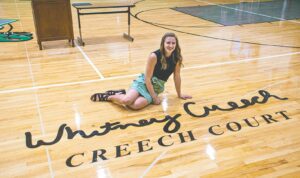 Creech went on to play at Western Kentucky University and is currently a girls basketball coach at Bowling Green High School.