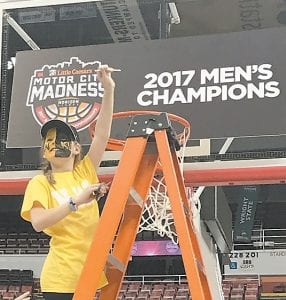 Jaylee Brennan, granddaughter of Jim and Jerri Elswick of Jenkins, took her turn cutting down the nets in Detroit recently after the Northern Kentucky University Norse won the Horizon League championship. The team is coached by her father, John Brennan.

The University of Kentucky Wildcats can always count on the loyal support of Letcher County fans, but when they play the Norse of Northern Kentucky University in Indianapolis on Friday night, there will be a Letcher Country connection on the NKU bench.

Lisa Elswick Brannen of Jenkins is married to NKU Coach John Brannen and they have twin daughters, Jaylee and Katelyn. Lisa is the daughter of Jenkins residents Jim and Jerri Lynn Elswick. There are two other Jenkins connections in the NCAA tournaments this year, Kentucky’s all-time leading scorer Whitney Creech, who now plays at Western Kentucky University, and University of South Carolina Gamecocks assistant head coach Matthew Figger.

Brannen is originally from Alexandria in northern Kentucky. NKU has played UK once before in a tuneup game for the 2013-14 season, falling by a score 93-63 that November. This is the first season NKU has been eligible for the NCAA Tournament and it is just the seventh school to get into the tournament in its first year of eligibility. The Norse will leave for Indianapolis in the team bus at noon Thursday. The Norse play the heavily favored Wildcats at 9:40 p.m. on Friday.

Lisa Elswick Brannen met her husband while she was attending Eastern Kentucky University, where he served as an assistant coach to former UK star Travis Ford. She added that her dad, Jim Elswick, always proudly wears the logo of whichever team John is coaching. Still, Lisa points out that Jim is a lifelong UK fan and that she grew up attending games at Rupp Arena with him, a time she has always cherished. 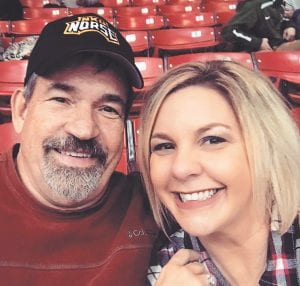 Above, former Letcher County resident Lisa Elswick Brannen shares a smile with her father, Jim Elswick of Jenkins, during a Northern Kentucky University game that was coached by Mrs. Brannen’s husband, John Brannen (left), who guided his team to the NCAA Tournament during NKU’s first season of eligibilty in Division I basketball.

“ I never imagined I would be married to an amazing man who would coach against them (UK) and beat them,” she said, adding that Alabama beat UK twice during her husband’s time as an assistant there.

Mrs Brannen said it’s no secret that she and her girls are extremely proud of the team and its head coach. She said she experienced one previous NCAA Tournament as a coach’s wife, in 2007 when VCU beat Duke in the first round. Being from Kentucky, that game was very special.

“We are so excited to be going to the tournament in our first year of eligibility,” she said. “What the coaching staff and players have done this year is truly amazing. The love and support we get from around the globe is amazing. (Brannen stayed with a host family during his playing days in Belgium and the two families stay in touch.) As I look at social media and see lifelong UK fans change their profile pictures to support the Norse it is something I cannot explain.”

Former Lady Cav Whitney Creech and the WKU Lady Toppers play their first-round game in the NCAA Women’s Division I Tournament against Ohio State in Lexington on Friday at 1 p.m. If the Lady Toppers win, they will play the winner of the Kentucky/ Belmont game at Memorial Coliseum on Sunday. The WKU/OSU game will be carried live on ESPN2. Creech led the nation in scoring during her last two years of high school and was the Kentucky Basketball Hall of Fame Female Athlete of the Year for 2016.

Matt Figger, son of Patti Figger, a nurse at Mountain Comprehensive Health Corporation’s Whitesburg Medical Clinic, and the late Louie Figger of Jenkins, is assistant head coach and recruiting coordinator at the University of South Carolina in Columbia. He has been with Gamecocks head coach Frank Martin since they came to USC in 2012, and serving as Martin’s top assistant the past four years. Figger also served on Martin’s Kansas State University staff for five years. Figger has 23 years of coaching experience and in 2017, USC’s recruiting class ranked 23rd nationally. USC guard Sindarius Thornwell was named as SEC Player of the Year for 2017.

Figger has been associated with several head coaching positions, and in a statement made after Figger’s promotion to associate head coach, Martin was quoted as saying, “I just want everyone to understand and know — players, and everyone who is around us — that Matt is ready to take on the challenge of being a head coach.”