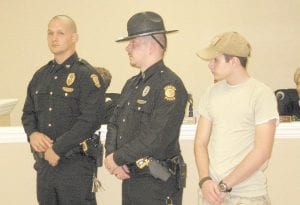 December will go down as the month for honors in Jenkins, as Mayor G.C. Kincer presented certificates of merit to three of the city’s first responders at the Jenkins City Council’s regular meeting. Kincer told the council he wanted to take the opportunity to recognize the three, Police Chief Adam Swindall, Jenkins Police Officer Josh Richardson, and volunteer fireman Steven Damron, for extraordinary service to the community.

Kincer praised Swindall for his work in returning a lost three-yearold to his parents in Payne Gap. Kincer said the child had wandered out of the house and when his mother noticed he was gone, she looked in the house and yard and then called for assistance. After an initial search failed, Kincer said Swindall decided he should try to put himself in the child’s place and found the child, who had crossed a stream and climbed a hill. He said the baby was cold and had taken his wet clothes off, but was otherwise all right. The little boy told Swindall he had chased a cat and followed it.

Kincer also expressed his pride in Richardson, who he said is one of the best officers with whom he has worked. Kincer said that while Richardson has not finished his Kentucky Police Academy training yet, he was on duty and responded to a citizen in the Premier subdivision who had a heart attack and was not breathing when Richardson arrived. Richardson administered CPR and resuscitated the man, keeping him alive until an ambulance could arrive. The man survived and is doing well. Richardson is also a member of the Jenkins Volunteer Fire Department.

“I’m very proud of Josh,” said Kincer. “He is one of the best offi cers, he’s brave and determined and he loves serving the city.”

Steven Damron is a student at Jenkins High School and a member of the Jenkins Volunteer Fire Department. When a dog crawled into a culvert in Dunham and got stuck, the fire department received a call. Kincer described the situation as being “a 23-inch dog in a 24-inch culvert,” which had a dropoff about halfway through it. He said when the firefighters looked at the situation, they went for Damron and got him out of class to ask if he would crawl into the culvert to rescue the dog.

“He was the only firefighter who could fit into the culvert,” said Kincer, gesturing to the group of firefighters who had attended the meeting. “They had to get him out of school. He said, ‘If you get me out of class, I’ll get the dog’.”

In other business, the council voted unanimously to accept the Fiscal Year 2010–2012 city audit. Lexington Accountant Rodney Welch, who grew up in Jenkins, prepared the audit and presented a Power Point slide show that highlighted its points. He said the city is in good financial shape and on solid ground.

“ You are solid,” said Welch. “You pay your bills on time and there is no evidence of mismanagement and nothing is out of order. I do want to see you do something about the garbage rates.”

Welch referred to an approximate 13.5 percent increase in tipping fees (an additional $5.65 per ton in charges paid for dumping garbage at the landfill), which were mentioned by City Administrator Todd DePriest earlier in the meeting. He also said the Utility Accounts receivable have risen by about $15,000, but added, “There’s not much you can do about that except to start turning off people’s water.”

The city has other receipts as well, with grants totaling $1,734,000, U.S. Department of Agriculture Rural Development Loans at $450,000, and interest of $4,000, for a total of $2,188,000. Welch said the city manages to avoid running in the red by not counting depreciation expenses in infrastructure, but agreed with Councilman Rick Damron that this is not a good practice and should be discontinued when it is possible. The city also has $1,407,500 in outstanding loans.

In other financial matters, Councilman Terry Braddock once again accused the city of overcharging for utilities, although the audit revealed a continuing loss on utilities. Braddock pointed to an end balance of $167,541.11 in utility revenue and refused to accept the explanation that the amount is temporary, in that although it builds up as payments come in, it is the account that pays utility expenses as they come in as well. City Finance Officer Robin Kincer told Braddock that several bills for sanitation and other expenses have not come in yet and when they do, they will be paid from the End Balance Account. Auditor Rodney Welch agreed with Kincer, but Braddock was having none of it.

“It is money out of circulation,” said Braddock, claiming it hurt local businesses. “If we continue to have these kinds of excess, I suggest we lower prices on water , sewer, and garbage. That’s a bad figure. A positive balance is not a good thing.”

When Braddock spoke fondly of a time when the city only had $600 in its Utilities End Balance account, council member Rebecca Terrill-Amburgey told Braddock the account is used to pay bills as they come in and said she does not remember that time at all fondly.

“Did you hear Todd (City Administrator DePriest) say we might have to raise the garbage bill?” asked council member Carol Anne Litts.

“No, we don’t need to raise them,” said Braddock. “Having so much money is not good for the town.”

Finance Officer Robin Kincer explained that the county is behind in billing the city for hauling garbage to the landfill and for landfill fees and explained that the revenue account consists of water, sewer, and garbage revenues and said when bills come in they are taken out of the End Balance Account to be paid. Councilman Chuck Anderson agreed, saying that the council has known for a while it would eventually have to pay higher fees for disposing of garbage and added, “We have to pay bills as they come in.”

“I’ll have to see all of this,” said Braddock, referring to city financial reports.

Carol Anne Litts then told Braddock that if the people who he has repeatedly said have problems with their bills would come in to the council meetings, the council would work with them to find the reason for high bills. Braddock has said in the past that the people who bring complaints to him feel intimidated by the council.

“If the people who have problems, instead of coming to you, instead of letting you carry the load, have them come to the meeting,” said Litts. “I would think if it was a severe enough problem they would come here. They will not be intimidated.”

Mayor Kincer then told Braddock, “I think the best thing is for you to come in and we will work it out with you.”

In his Mayor’s report, Mayor Kincer pointed to a number of accomplishments the city has made in 2011, including a new city hall, improved downtown parking, upgrading utilities software, and the growth of the Gateway Industrial Park. Kincer praised city workers and Letcher County Economic Development Director Joe De- Priest and said that at present, all city-owned property is under lease and providing revenue to the city.

Kincer predicted a bright future for the city, pointing to infrastructure improvements currently underway and said that the city is well located for growth. He said in the next three years the city will use a $50,000 grant obtained by the Kentucky River Area Development District to explore for a second water source in the area behind the old Goodwater Dam. He also pointed out construction near Raven Rock Golf Course on property owned by Pike County businessman Greg Johnson. Kincer said the work is ongoing and that while Johnson has not revealed all his plans, he hopes to attract a hotel and shopping center to the site.

Kincer also thanked Fifth District Magistrate Wayne Fleming for all the work he has done to help the city in the last year and said a final design for the World War II memorial is almost complete and will be revealed soon. Fleming told the council that all praise should go to Mary Anne Mullins of Burdine, who he said has been the driving force behind the memorial and has done much of the work.

• Paul Nesbitt of Nesbitt Engineering reported that work began on Phase I of the Payne Gap Water Project on December 5.

• The city pumped 12,869,000 and lost 8,754,000 gallons of treated water in November, for a 68 percent loss. Of that, 5,975,000 gallons were unaccounted for, 46 percent of treated water. City Administrator Todd DePriest said he looks forward to having no water losses when all city lines are replaced.

• Jenkins resident Roy Triplett told the council that on several occasions sanitation workers have neglected to separate “blue bags,” recyclables, from regular garbage and said he has called them to account a couple of times. Mayor Kincer said the problem will be dealt with immediately. Rebecca Terrill-Amburgey said she has heard that complaint from other citizens and urged the council to set a better example on recycling as well.

• The council voted to name three sections of highway in the city respectively for Consolidation Coal Company, Beth-Elkhorn Coal Corp. and TECO. Magistrate Fleming also urged the council to remember the tremendous contributions made to Jenkins by the United Mine Workers of America.