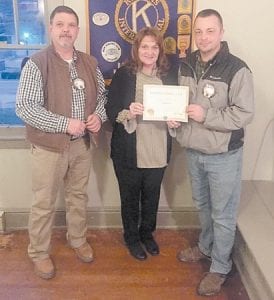 The Kiwanis Club of Jenkins recently had a surprise visit from Kiwanis Lieutenant Governor Donna Ratliff of Kentucky-Tennessee District, Divisions 8. In presenting the Distinguished Club award Ms. Ratliff stated that she had had the honor of presenting this award only three times in her ten years as Lt. Governor.

The period encompassed the 2017-2018 fiscal years. The certificate reads, “For your untiring efforts and continuing support as we serve the children of the world.”

In presenting the award Ms. Ratliff stated that one of the most important things which led to the designation is having a good secretary, Michael Watts Jr., who submitted all of the required reports in a timely manner. Some of the other things which the Jenkins club accomplished are: increased membership, “over 30 percent”, participation in local civic activities, support of school programs for student activities, fundraisers, partnering with other civic clubs for various projects, monetary contributions to Kiwanis International. One of the most rewarding projects was providing financial assistance to the family of young Hunter Ashley who has been a leukemia patient for the past three years. The family had incurred substantial financial hardships having to travel frequently to the University of Kentucky Hospital for treatments and regular travel to Pikeville Medical Center for evaluation. We also had a “Christmas for Hunter” fund drive to buy toys and clothing.

Each year the club makes a financial donation to Kiwanis International, which currently is in a partnership with U.N.I.C.E.F. in an effort to wipe out tetanus in underdeveloped countries worldwide. Each year thousands of young mothers and infant children die from the dreaded disease, which is treatable.

The Kiwanis Club of Jenkins was established in 1939. It meets each Thursday at 6:30 p.m. at the former Jenkins Woman’s Club building on Main Street in Jenkins. All men and women are invited to join and try to make the community better. The club’s motto is ‘Kids Are Priority One’.