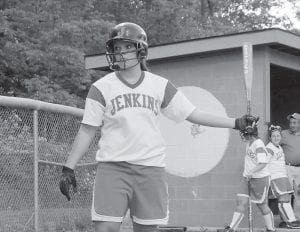 Brooke Webb led the way for Jenkins in the district championship game by slamming a homerun in the second inning. Webb was also named to the All-District team. The Lady Cavaliers advanced to the 14th Regional Tournament last night (Tuesday) to face Leslie County. (Photo by Chris Anderson)

The Jenkins and Letcher County Central girls’ fastpitch softball teams both advanced to this week’s 14th Regional Tournament after the Lady Cavaliers won the championship game of the 53rd District tournament held at Cordia last week.

Both teams were scheduled to play last night (Tuesday) after rain delayed the Lady Cavs’ tourney opener at Breathitt County High School in Jackson on Monday. The Lady Cavs were to play Leslie County and the Lady Cougars were to face Estill County.

The Lady Cavs defeated the Lady Cougars for the third time this season, this time by an 8-2 margin, to earn their third consecutive district title. Both teams reached the final with easy first round victories on May 18. The Lady Cougars ousted the Lady Patriots from Knott Central from the tournament with a 13-0 victory and the Lady Cavs made short work of the Cordia Lady Lions with a 16-1 win.

After a scoreless first inning in the championship game, junior cleanup batter Brooke Webb jumpstarted the Lady Cav offense in the bottom of the second inning clubbing a home run that easily cleared the fence in left field for the game’s first run. Whitney Gibson and Kayla Stambaugh followed Webb with consecutive singles and the Lady Cavs loaded the bases when designated hitter Sierra Kiser was hit by a pitch. Left fielder Tazsha Hall smacked a double, scoring Gibson and Stambaugh while advancing Kiser to third. Kiser later scored on a ground out by right fielder Sarah Belcher, staking the Lady Cavs to an early 4-0 lead. 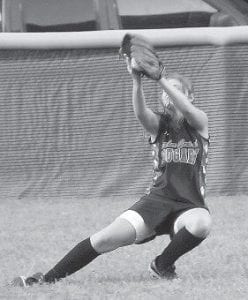 Letcher County Central right fielder Katie Mynster has a talent for making dramatic catches on fly balls. This one was no exception as she rebounded from losing her footing to pull down the catch and get the out. (Photo by Chris Anderson)

Centerfielder Ali Goff led off the inning with a single, promptly stole second and scored when Hall singled for her second hit of the game. A single by Belcher and a Lady Cougar error on the play allowed Hall to score and Belcher to advance to third. Belcher then scored on Emily Walker’s single. Walker stole second and advanced to third when catcher Hillary Brashear hit into a fielder’s choice. Walker closed out the Lady Cav scoring for the inning when she scored on a single by Webb.

The Lady Cougars picked up a run in the bottom of the seventh inning to close the final score to 8- 2 when Boggs was hit by a pitch, advanced to third on a double by center fielder Courtney Johnson, and scored on a ground ball out by designated hitter Ameba Shepherd.