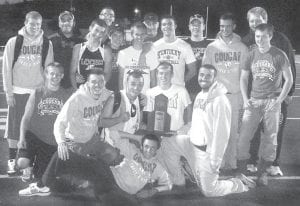 Members of the Jenkins High School and Letcher County Central High School boys’ and girls’ track teams are among more than 4,500 athletes who will descend on Louisville and Lexington this weekend for state championships events in track and field and tennis.

Jenkins track coach Robert Adams said the said the school’s boys’ and girls’ teams participated in the regional finals last week and won in relays and pole vaulting, resulting in a total of nine boys and one girl from JHS advancing to the KHSAA State Track and Field Championships in Louisville.

The Jenkins participants were honored at Tuesday night’s meeting of the Jenkins City Council, of which Adams is a member.

Friday’s regional meet ended in a tie between the girls’ teams from Letcher County Central and Leslie County at 160 points each, but a coin toss gave the title to Letcher County. The boys’ team won the regional by collecting 154 points to easily outdistance runnerup Harlan County Central, which had 120 points. 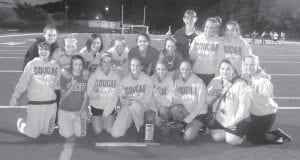 The Jenkins girls’ team finished seventh in the Class 1A Region 7 finals at Fairview High School, while the boys’ team finished fifth. Jenkins will begin competing on Thursday at Owsley Frazier Cardinal Park on the campus of the University of Louisville with Class 1A boys’ and girls’ action. The Class 2A meet which include Letcher Central will be on Friday. Action begins each day with the field events at 1 p.m. The running events begin at 3 p.m.

Admission for each session is $10 each day. All session armbands are available, good for all three days, for $20 per person. Children under 10 are admitted free.

A complete schedule of events for each class is posted on the KHSAA website. Fans may follow along in real time as the results of each will be posted upon completion. The web link to view the track and field in formation is www.khsaa.org/track. Results will also be Tweeted using @ khsaaevents and the hash tag #khstf.