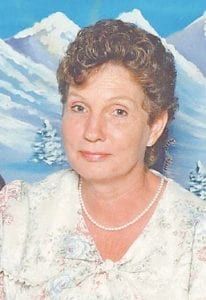 A daughter of the late Emit Hassel and Bessie Johnson, she was born in Jenkins. She was also preceded in death by four brothers Willie, Homer, Guy and Gail.

She spent her childhood and growing up in the mountains of Kentucky helping family and friends. She had a love of animals and was known to always have at least 3-4 at any time-varying from cats to cows. As a teenager she had a love for all things Elvis which continued on into her adult life as evident of her large and vast collection of Elvis memorabilia. She enjoyed gardening, drawing and painting and was an avid photographer.

She was graduated from Jenkins High School in June 1961. She joined the Order of Eastern Star and became a lifelong member.

Mrs. Hiatt obtained her certifi ed nurse assistant certificate and worked as a CNA. She met her husband as a pen pal in 1963 through a mutual friend while writing letters back and forth while he was overseas in the Army.

She was involved in the Boy Scouts and Girl Scouts of America and she and her husband opened their home to foster children, providing a giving and nurturing environment for many children for several years.

She worked for New Market, Iowa schools as a driver from 1998 until their closing.