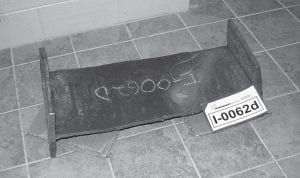 About two weeks ago the Jenkins Volunteer Fire Department received a three-foot steel beam which was once a part of the structure of the World Trade Center. The Port Authority of New York and New Jersey, which owned the Twin Towers, has recently begun donating similar beans to about 1,500 fire departments throughout the United States for 9/11 memorials. (Photo by Sally Barto)

The Jenkins Volunteer Fire Department is the new owner of a piece of history associated with the Sept. 11, 2001 terrorist attacks on the World Trade Center in New York City.

A piece of a steel beam recovered after two planes hijacked by terrorists crashed into the Trade Center’s twin towers was awarded recently to the fire department for use in remembrances of and teachings about the attacks. Fire Chief Rick Corbett said Jenkins was one of about 1,500 fire departments throughout the United States to apply two years ago for steel beams from the Port Authority of New York and New Jersey, which owned the World Trade Center.

Sept. 11, 2011 will mark the 10-year anniversary of the date al-Qaeda hijackers crashed two airliners into the World Trade Center. A third plane crashed into the Pentagon located in Arlington, Va. and a fourth airliner headed toward Washington D.C. crashed in a Pennsylvania field after flight crew and passengers tried to take control back from hijackers.

Of the 2,752 people who died in the terrorist attacks, 343 were firefighters and 60 were police officers.

Corbett applied for the small piece of the World Trade Center to give people in the community a chance to see it and to remember those who died.

“It’s a part of the history of America,” said Corbett.

The steel beam, which had been stored at an airport hangar at John F. Kennedy International Airport, is about three feet long and weighs 125 pounds. Corbett requested a small piece so it could be transported to different schools to give children an opportunity to look at the steel beam.

“It looks like one side has been bent off,” said Corbett. “It does look like it has been through a fire and everything.”

Corbett said the fire department will build a display case to hold the beam, which will be located near the main entrance of the fire station.