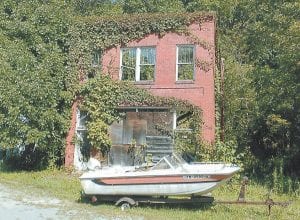 Jenkins is going to court over blighted properties

The City of Jenkins will focus on long- and short-term clean-ups this spring. In the short term, the city will conduct its annual spring clean-up, which will begin on April 25 and will last until May 20. However, removing blighted and deteriorated houses, cleaning up unsightly property, and generally putting a better face on the city also features prominently as the cornerstone of efforts to attract new residents and businesses.

At the March meeting of the Jenkins City Council Monday night, Mayor Todd Depriest asked the citizens of Jenkins to help out by cleaning up their own property and said that the city will pick up material during the spring clean-up at no charge. Depriest said he hopes that by taking down deteriorated properties, it will free lots for development and at the same time, an overall cleanup will make the city a more desirable place and help attract interest. He added that the city is currently looking for funding to begin work to make Elkhorn Lake more attractive, including getting rid of the lily pads, and building a series of docks that will eventually anchor the lake walk. Depriest said that the Kentucky River Area Development District is helping the city find funding for lake upgrades.

Depriest also told the council that while the city is fortunate not to have a lot of empty storefronts like many cities in the area, the lack of space also is an issue that should be addressed in order to attract business to the downtown area. He said the city badly needs a motel along US 23 and added that he is still interested in some sort of a tourist stop along the highway, with restrooms and tourism information.

“We have a lot of great ideas,” said Depriest. “But very little money.”

In other business, City Administrator Benny Mc- Call reported that progress is being made on the blighted and deteriorated housing situation, with two houses close to demolition. The city recently received a judgment that will allow it to take down a house on Quiet Row in Dunham, and added that he expects a second judgment on a house in Rocky Hollow soon. McCall also told the council that a new tax software program soon go online and will work in synchronicity with the county’s tax software, making it easier to work with county accounts and track delinquents.

The council was unanimous in praising city workers and volunteers from the Kiwanis Club and other organizations in aiding with the 53rd District Basketball Tournament, which was held at the Jenkins High School gym the week of February 21. Depriest said that parking went smoothly and thanked LKLP Community Action for providing extra transportation to shuttle visitors to more distant parking spots.

Jenkins Police Chief Jim Stephens also praised city police officers and workers for their extra efforts during recent winter storms. Stephens said that officers helped by delivering groceries and medicine to people who couldn’t get out, and that his officers and other city workers spent long hours on the job during the bad weather.

Ken Reid of Nesbitt Engineering reported that work on the Dunham Water Project is getting back on track after having been slowed by the bad weather and resulting mud. He said that all of the Mudtown district will be on new water lines by the end of the week, and that a concrete pad for the Dunham water tank was recently poured. The Dunham project is just over 50 percent complete.

Mayor Depriest asked the council to approve a new bank account for Kentucky Infrastructure Authority funds that will be used as a maintenance expense account and emergency fund for a Community Development Block Grant that will allow the city to complete the Jenkins Water Line Replacement Project. He said that a few hollows and side roads will remain when the Dunham Project is complete, and when they are finished, the city can turn the tap off to all the old lines, including some that run into empty ground, and realize the benefits of the new lines, especially in a big reduction in the loss of treated water.