Jenkins officials vow to get tough with noisy, fast ATV’s 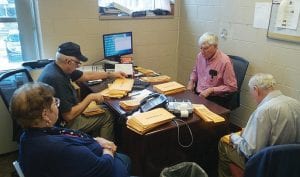 Mayor Todd Depriest told the Jenkins City Council this week that it is time to take action on problems being caused in the city by allterrain vehicles.

At the council’s November meeting Monday night, Depriest said he is happy to have ATV riders visit the city and take advantage of its trailhead access and buy supplies, but that riders must be considerate and obey the law. He said that as is the case with most things, only a few individuals are ruining things for everybody else. Depriest said the worst actors are local young people and adults who take mufflers off their machines or ride then recklessly, doing wheelies in town and driving too fast.

Councilman Chuck Anderson said one or more riders in the Lakeside area ride wide open late at night on ATVs with excessively loud mufflers, and endanger pedestrians by speeding on Lakeside Drive. Anderson added that cars also go much too fast on Lakeside, particularly in the afternoon when pedestrian traffic is at its peak.

Councilman Rick Damron said the city does not have the power to override state and federal laws, so it is still illegal to ride an ATV on state highways even though Jenkins is an “ATV friendly community.”

Depriest said he intends to meet with the traffic planner at the Kentucky River Area Development District and create a plan for dealing with the issue.

Harold Kelly of Nesbitt Engineering reported that he recently spoke with Kimberly Thompkins of the Department of Transportation and said she has found a source of advice for discussing applications for in-kind funding. The question of how much work the city can do to qualify for a matching grant for a sidewalk to Jenkins High School has been as subject of contention for a while. Kelly said Thompkins had a meeting last Friday on the matter but he has not heard from her.

Depriest also told the council that Rodney Welch, an accountant from Georgetown who regularly conducts the annual audit, was at city hall recently and he expects Welch to have a complete audit soon. Depriest said the city has one new police cruiser that was recently paid for and the sanitation truck is now paid for as well He said those items, along with new jobs coming to town with the completion of the Hunt Brothers Warehouse and several other businesses in Gateway Industrial Park, help create a brighter economic picture for the city.

Casebolt told the council that hospice is not just for cancer victims, but for any patient with a serious illness, and said that with good pain management patients can live longer and better lives. She added that Bluegrass Care is able to provide medications, medical supplies, and equipment at a lower charge than patients normally pay and that hospice care can last for weeks and months.