JENKINS POLICE GET THANKS — 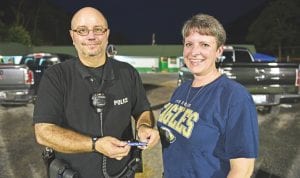 Rye Cove, Va., football fan Vanessa Wynn, right, presented a bracelet to Jenkins Police Chief Jim Stephens during a pre-season football game on Aug. 12. The bracelet reads “Blessed are the peacemakers” and is part of the “Matthew 5:9 Project,” a Christian-based outreach organization that recognizes the service of police officers to their communities. Wynn approached Stephens after the game, thanked him for his service and gave him the bracelet. (Photo by Chris Anderson)