Jenkins project has been 8 years in the making 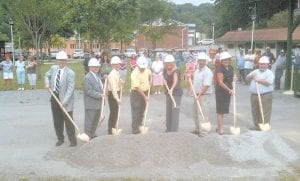 The City of Jenkins held a groundbreaking ceremony for the third phase of a waterline replacement project in the city.

Mayor G.C. Kincer told onlookers that replacing the antiquated water lines, many of which are as old as the city which will celebrate its 100th anniversary this year, has taken teamwork. Kincer praised 94th District State Representative Leslie Combs, who took the stage with him Tuesday at Robert “Pud” Schubert City Park, and 29th District State Senator Johnny Ray Turner, who was unable to attend. Kincer also praised Kentucky Governor Steve Beshear, Letcher County Judge/Executive Jim Ward and District Five Magistrate Wayne Fleming, who represents Jenkins on the fiscal court, for the aid they have given to the city.

Phase III calls for the installation of approximately 7,500 line feet of six-inch water line, 8,250 line feet of four-inch line, and 1,000 line feet of two-inch water line to replace deteriorated sections of the existing water distribution system and will include Lakeside, Wheaton Hollow and the Little Shepherd Amphitheater. Kincer said the work will be paid for with a $445,000 loan from the U.S. Department of Agriculture’s Rural Development Agency as well as a USDA grant for $405,000 and a separate grant from the Appalachian Regional Commission for $500,000.

Paul Nesbitt of Nesbitt Engineering said his company has worked more than eight years with three mayors and councils on the design, planning, and implementation of the overall waterline replacement project, and told the crowd that many other cities with aging infrastructure are having problems similar to Jenkins and added that Jenkins has been a leader in putting together funding packages to replace the old city infrastructure.

Wooten said that Jenkins stands out in the Fifth District in its willingness to work cooperatively to address its problems and praised Jenkins and Letcher County for their vision in doing good infrastructure work in tough times. Vernon Brown of USDA reminded the crowd that taxpayer funds are paying for the work, and said it is a good example of taxpayer money returning to the community.