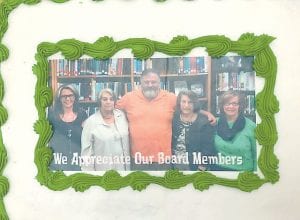 Jenkins Schools Superitendent Mike Genton had this special cake, complete with an edible photo, made to honor members of the Jenkins Board of Education, who appear in the photo.

Flu and other illnesses cut the attendance rate in some classrooms in the Jenkins Independent School District to around 80 percent. However, Director of Pupil Personnel Rondall Baker told the Jenkins Board of Education at its January meeting Monday that attendance in the district stands at 92 percent with an enrollment of 410. Baker added that Monday’s attendance was 93 percent.

Superintendent Mike Genton said that if overall attendance falls below 85 percent, most districts lose too much money in average daily attendance (schools receive state funding based on average daily attendance) and at that point it is better to close the school for the day. Board member Brenda DePriest said she was informed earlier by representatives of Whitesburg Appalachian Regional Hospital that another influenza strain is on the way that is considered by the U.S. Centers for Disease Control to be more serious than the strain that is currently ravaging most of the country. The 1918 influenza pandemic is estimated to have killed about 500 million people, about one-third of the world’s population at that time.

The board started the first meeting of the year with new officers and a mixture of financial news that covered both extremes. Paulette Sexton was chosen as Board Chair and Sarah Tackett Brown was elected as Vice Chair. Both elections were unanimous. As is customary, Superintendent Genton will continue as Board Secretary and Federal Programs Director Sherry Wright will continue as Treasurer. The board will continue to meet on the fourth Monday of each month at 6 p.m., except for May (Memorial Day) and December (Christmas) when they will meet respectively on May 21 and December 17.

Superintendent Genton also reported that January is School Boards Appreciation Month and showed a video from the Kentucky School Boards Association that was made to show its appreciation of local school boards. Genton also said he had a cake made for the occasion, complete with an edible picture of the board members.

The news in the financial report presented by District Finance Officer Candala Gibson was a mixed bag. After reporting that the general fund stands at $1,046,440.73, Gibson told the board that her draft budget would not be presented in the traditional line item format because of uncertainty caused by funding issues with the state government. Gibson said that some programs will gain slightly and others will see cuts, and that tax receipts will probably be lower as well. She expects more complete information soon.

Superintendent Genton added that he and a group of superintendents represented by the Kentucky Valley Educational Cooperative will present a report to the state on the effect of the ongoing issue with funding pensions, and the higher negatives that even small cuts in funding have on smaller school districts than on the large districts in cities. Genton said that it is likely the state will no longer pay for professional development training and the district will have to pick up some of the cost, although by necessity, the training will be limited.

The board also received its annual audit from Cloyd and Associates of London. Madgel Miller of Cloyd and Associates presented the audit and told the board that the most important statement in the document is that the system has a clean opinion and the financial statements in the audit were presented fairly. The ending cash balance was $1,221,914 in 2017, with fund balances of $359,671, and $441,258 reserved for capital projects. The total net position is $2,144,413. This includes net investment for capital assets, and funds restricted for capital expenditures (buildings etc.). The system also has a fund balance (general fund, instruction fund, transportation, and other funds) of $891,847.

Miller also complimented the staff and board for the ease of working with them and their accessibility. She said the district’s financial staff does a very good job and added that board members take their jobs seriously and that the board’s dedication carries over to the staff. The board voted unanimously to accept the audit.

Jenkins Middle High School Principal Eddie Whitaker reported on activity in the school and told the board that Jenkins students Morgan Henson and Sammuel Bentley were awarded $1,000 scholarships by WYMT for academic excellence.

He also said that Hannah Robbins and Trinity Beauparlant were selected to participate in the Upward Bound program. Upward Bound provides opportunities for participants to succeed in their precollege performance and ultimately in their higher education pursuits and serves high school students from lowincome families, and high school students from families in which neither parent holds a bachelor’s degree.

Elementary Principal Stacy Collier reported that students at Burdine Elementary have been increasing their use of Google Classroom during the time they were out of school due to bad weather. Collier said that the programs are well designed and are not difficult. She also told the board students have participated in Pennies for Patients, bringing change to school to donate to hospital patients, and that teachers are implementing technology into their daily lessons.

Director of Food Service Susan Baker reported that a Student Nutrition and Physical Activity public meeting was held before the board meeting and said results will be forwarded to the state board of education.