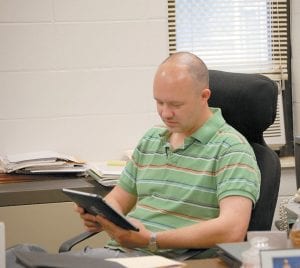 Damian Johnson, technology coordinator for the Jenkins Independent School District, used an iPad on June 13. The Jenkins school board is believed to be the only school board in Kentucky to use iPads to access paperless “board packets” containing information used in board meetings via the Internet.

Members of the Jenkins Independent Board of Education may be the first in Kentucky to use tablet computers to access “board packets” at school board meetings.

Brad Hughes, spokesperson with the Kentucky School Boards Association, said even though about a third of school boards have gone to paperless packets in the last four years, Jenkins is the first district he knows of where officials use the iPad, the tablet computers manufactured by Apple Inc.

“It’s the next generation of use of technology,” said Hughes. “Using new technology clearly is a school board that is trying to be cutting edge.”

Board packets include detailed information about agenda items board members may be asked to address during monthly meetings.

The Jenkins board has not used paper packets in the six years Eileen Sanders has served on the board. She said the main reason for using the Internet to access meeting materials is to “keep from having to print all of those pages and pages of documents.” Sanders said the stacks of paper can often measure an inch and a half in thickness.

“I don’t know how many trees we have saved,” said Sanders.

“They don’t have bulky papers to go through,” said Watts. “I think it is much more efficient for them. It’s a better technology.”

Hughes said 60 out of Kentucky’s 174 districts have gone to paperless board packets because of cost savings and the ability to easily perform searches, and to allow the public to have more access to information.

“It’s a lot of staff time spent on printing, producing and delivering board books,” said Hughes. “ You’ve got to be smarter and faster and technology does allow that. The benefits are significant.”

Damian Johnson, district technology coordinator at Jenkins, spends more than eight hours the week before each meeting scanning documents before he places the board material on a passwordprotected web page that is not available to the public One paper copy of the packet is placed on file at the district’s central office.

“ The biggest advantage for the administration is we have a searchable electronic archive,” said Johnson, who also has a district-issued iPad.

Johnson said 90 percent of the paperwork from regular board meetings held since 2005 are archived on the Internet and allow the board to quickly find information from past meetings. Johnson used to copy the information onto compact discs, which the board read by using laptop computers.

“The laptops were dinosaurs and didn’t run properly,” said Sanders. “The iPad was an alternative to the laptop.”

Watts, Sanders and Johnson all say iPads make it easier to keep in touch with staff while they are away at conferences and other meetings.

“It allows them when they are elsewhere to remain in contact to still have access to email and communicate,” said Johnson.

Watts said the iPads are smaller than laptops and are easy to take wherever she goes, especially if she parks far away from a meeting location.

“It’s just so much more convenient,” said Watts. “We are really pleased with them.”

If funding becomes available, Watts would like to purchase iPads for student use.

“I think that is what schools will go to in the next few years,” said Watts. “Textbooks are so expensive. I see it all changing.”

If the district can secure a grant to help fund the purchase of iPads she would start with the freshman class and try out the tablets with them.

“Just think if they had an iPad to take home instead of textbooks,” said Watts. “We are starting to see them as a student tool.”

Watts would also like for every Jenkins teacher to have one of the tablets.

Hughes said a handful of schools in Kentucky have iPads available for student use, mostly in the upper grade levels.

Johnson said there are issues with providing educational content on an iPad because the tablet does not support Adobe Flash Player, which most educational programs require to operate.

Watts said iPads for the board members were purchased in January at $599 each from the general fund. The district has a dozen iPads, including five for the board members, one for Watts, three for principals, one for Johnson and two for science teachers. The instructors won the iPads through a contest with the University of Louisville’s Dataseam Project.

Johnson said by participating in the U of L program, the Jenkins Schools technology department was able to purchase $100,000 worth of computers this past year for $30,000.

“Funds are limited and that is a big reason why we participate in Dataseam,” said Johnson. “It has allowed us to keep our computer/ student ratio high and keep our work stations current.”

The oldest Apple iMac computers at Jenkins are less than four years old. Johnson said there are two students to every computer and the Kentucky Department of Education recommends a student/ computer ratio of six to one.

“We are doing well,” said Johnson.

The majority of the computers used in the Jenkins district are manufactured by Apple. Hughes said it makes sense for a school board to use iPads.

“It just makes more sense if you have everyone on the same page technologically,” said Hughes. “If iPads take more of the market that is the direction I think more school boards will go.”