Jenkins School entrance to be updated

The planned upgrade for Jenkins High School will include an entryway designed for security and a refinished Cavalier logo decorating the hallway. The entryway is controlled to provide additional security to keep unwanted intruders out of the building during school hours.

The Jenkins school board received a design update from project architect Mike Sparkman of Alt-32 Designs of Lexington at its September meeting concerning building and grounds improvements for the Jenkins Middle High School and the Burdine Elementary School.

Sparkman said that the new plan will take several student parking spaces but that in order to be compliant with the Americans with Disabilities Act (ADA) parking requirements, compliant spaces will have to be enlarged. He added that the parking lot will need repairs to the stone base under the blacktop before being repaved because paving won’t be effective otherwise. He added that he will construct an alternative parking plan for the board to examine and he recommends that work to improve the parking be addressed in the spring after school is out for the summer. 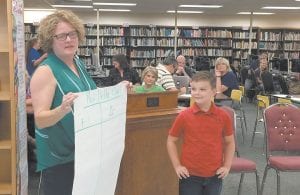 Teacher Lynn Gilliam with third-grader Damon Church and his Plus Delta Chart at the Jenkins board meeting.

Sparkman also said that restrooms will present a construction challenge and he hopes they will be rebuilt during the summer break as well. He added that there are ADA issues with the restrooms that will have to be addressed. All exterior doors will be replaced and the vestibules will be rebuilt in both buildings. Sparkman said the work will be done when students are using the buildings and contractors will do their best to minimize interference with classes. An area for coaches and administrator will be added to the locker rooms in both gymnasiums for security purposes too.

Several students who are involved in extracurricular academic projects were also introduced to the board and discussed their work and demonstrated the things they have done.

Kee Kee Bentley, Jenkins High’s representatives to the Student Senate, told the board she had applied for a Community Challenge Grant for $10,000 that will be used to convert extra space in the MHS building for use as a community wellness center. Bentley said the plan includes the purchase of elliptical exercise machines, treadmills, and exercise bicycles. She added that all members of the center will have access to the weight room and will be supervised by a faculty member, who will also teach people how to use the equipment and exercise properly.

The hours of operation and cost to community members will be determined. Superintendent Mike Genton said he thinks the project is a good idea, but told Bentley she must make sure there will be a constant faculty presence when people are using the equipment. He said the weight room only has one working treadmill at present. Bentley told Genton that she is confident that the school will receive the grant, but that the project will have to be approved by the school board. The board unanimously approved the plan.

Burdine Elementary Principal Amanda Anderson introduced elementary students who are involved in Leader in Me projects and third grader Damon Church explained a plus delta chart to the board. The chart lists positive behavior or plus behavior on one side and negative or minus behavior on the other side. He said that the students use it daily to discuss how to exhibit good and bad behavior.

Kaylee Owens, Shaun Michael Collier, Ben Swindall, and Anthony Wyatt demonstrated planning that will help students resolve problems and meet situations when they arise. Each child showed one plan that will help them do better in school and in life.

Shaun Michel Collier’s plan was to stop, think and do the right thing, and he said that everyone should be proactive and set goals.

Kaylee Owens’s plan was to put first things first and to take care of important matters before you relax. “Work now, play later.”

Ben Swindall talked about how to make a winwin situation by “understanding to be understood.”

Anthony Wyatt presented Synergy, and said that working together is better for a good balance.

District Finance Officer Candala Gibson told the board that the annual audit is currently underway by auditors from Cloyd and Associates of London, and that the audit should be complete by November. She announced a working budget for the next school year of $3.8 million and said that the General Fund balance as of August 31 stood at $802,969.99. Gibson also told the board members that although it doesn’t seem like it, they have completed the first quarter of their fiscal year.

Federal Programs Director Sherry Wright presented the District Funding Assurances and New Assessment System Overview, both of which are required by the federal government. The board approved both plans unanimously. She added that test scores will be out this week and will be on the Kentucky Educational Television website as well. She said there are a number of changes in the evaluation procedures and she would like to address a different topic each board meeting.

Technology Director Damian Johnson presented the Annual Data security and Breech Notification Act that complies with updated requirements from the Kentucky General Assembly. Johnson said there have been changes to identify and document data and to ensure that student data is kept private. He also said that most things that cause data breeches are in decline with the exception of actual attempts to breach data.

Cristle Carter presented the New Teacher Mentoring Program update to the board and discussed some components of the certified evaluation plan. She said there are new standards for some subjects and she has made the information about the new standards available to teachers. Carter also emphasized the importance of primary sources in history classes. Primary sources are pictures, journals, and other first-person accounts of historical events from the people who actually took part in them.

Pupil Personnel Director Rondall Baker reported that enrollment stands at 427 and attendance stands at 92.4 percent. Superintendent Genton said that he hopes the Leader in Me program will help approve attendance but admitted it is an ongoing problem in every school. Baker also gave a report from Resource Offi- cer Jim Stephens saying that there were 29 complaints with four medical issues, 18 miscellaneous, and three student personal issues for guidance and advice. Baker said that Stephens’s presence in the building has cut down on a number of incidents the schools have had in the past. Genton agreed.

School Nurse Lisa Collins reported on attending the District Health Coordinators conference in Frankfort, and said that she learned that every school is struggling to meet the state vaccination requirements. She said she is making good progress getting Jenkins students vaccinated and that there are a number of vaccination certificates on file. She credited the involvement of teachers and staff.