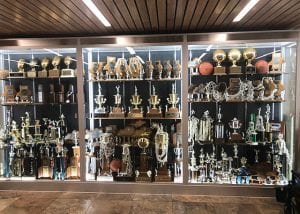 An updated trophy case is now in place at the newly-renovated Jenkins Middle High School. Officials with the Jenkins Independent School System say that although the 2019 Cavalier football season had to be canceled, the school will continue playing the sport in some form until it can rejoin district play after two years. (Photo by Willian Farley)

involved with football at every level for much of his life, and that he is determined to keep football alive at Jenkins.

“I played football in high school and in college,” said Genton. “And I coached football too. I am absolutely committed to the students and players of Jenkins, and I will do all I can to ensure that we have a football program.” He added that he had travelled to every game to help with the radio broadcasts.

Genton said that for the next two years at least, Jenkins will not compete in district play, but will field junior varsity teams. He and Johnson both said the program has a good number of young players coming along who have been very successful in middle school football. Johnson said the middle school team was eight and two last year and is currently six and two, and was playing the final game of the season that evening.

Genton said that since the school will be fielding a JV team, it will not be playing on Friday nights again, until the team competes at the high school level. He said the team will try to schedule its games for Saturday and will do everything possible to have a good atmosphere for the games. Genton also said that Head Football Coach Kenneth O’Quinn is currently employed as a teacher as well as a football coach and it is his intention to keep O’Quinn in his role as head coach. He said that while none of the assistant coaches were staff members at the school, they all received a stipend for coaching. Genton also told the board that while the season is over, the school will still hold a homecoming ceremony and Seniors Night, and the players will still receive letters and jackets.

“This is cyclical,” said Johnson. “It’s a blip,” referring to the lack of players. “I think we will be back and we aren’t ready to give up. That was hard but we exhausted every option we had. We had three players with season-ending injuries and when you can’t put 11 players on the field, you don’t have much choice. The players were devastated, but they have a positive attitude and are very proud of what they accomplished.”

Johnson and Genton both said it was one of the hardest things they have ever done to inform the players that the season was over, but they just couldn’t play without enough players. Genton made a video presentation to explain the decision that is available on the school’s Facebook Page at www.facebook.com/JenkinsIndependentSchools. He said the issue concerning the safety of the players had been paramount in their thinking.

“We were thin to begin with and we’ve had a rash of injuries,” said Genton. “At this point we’re afraid that the safety of our young men is being put in jeopardy. But I want everybody to know this, that we’re not giving up on our football program.”

Genton went on to describe plans to go “nondistrict” for a couple of years and find teams with which the school can be more competitive. “But by no means are we expecting to never have football again. This is a temporary thing and we’re going to come up with a solution and move forward.”