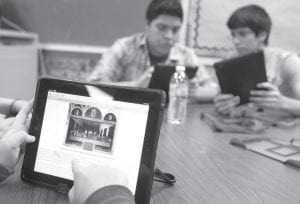 The Jenkins Independent School District hopes to begin providing students with iPad computer tablets like these handed out to students in McAllen, Texas earlier this week. (AP photo)

The Jenkins Independent School System has set a goal of having every student in its middle high school using a school-issued iPad computer tablet instead of relying so heavily on textbooks if funding can be found.

Superintendent Deborah Watts told the Jenkins Board of Education at its February meeting that while money to buy the tablets will be an issue, she wants to begin the transition as soon as possible by providing iPads to every incoming sixth grade class as they move through middle and high school until every student is using the tablet.

“Getting the money will be an issue,” said Watts. “But we will do whatever we can do to make it happen.”

Apple Inc. introduced the iPad in the spring of 2010. Since then, it has rocketed to popularity as a teaching tool on many college campuses, with many public secondary schools following suit.

Last fall, Woodford County High School in Versailles became Kentucky’s first public high school to give an iPad to each of its 1,250 students.

The iPads generally cost districts between $500 and $600 each, depending on what accessories and service plans are purchased.

Educators across the U.S. say the sleek, flat tablet computers offer a variety of benefits. They include interactive programs to demonstrate problem-solving in math, scratchpad features for note-taking and bookmarking, the ability to immediately send quizzes and homework to teachers, and the chance to view videos or tutorials on everything from important historical events to learning foreign languages.

They’re especially popular in special education services, for children with autism spectrum disorders and learning disabilities, and for those who learn best when something is explained with visual images, not just through talking.

Some advocates also say the interactive nature of learning on an iPad comes naturally to many of today’s students, who’ve grown up with electronic devices as part of their everyday world.

But for all of the excitement surrounding the growth of iPads in public secondary schools, some experts watching the trend have warned that districts need to ensure they can support the wireless infrastructure, repairs and other costs that accompany a switch to such a tech-heavy approach.

And even with the most modern device in hand, students still need the basics of a solid curriculum and skilled teachers.

“There’s a saying that the music is not in the piano and, in the same way, the learning is not in the device,” said Mark Warschauer, an education and informatics professor at the University of California- Irvine whose specialties include research on the intersection of technology and education.

“I don’t want to oversell these things or present the idea that these devices are miraculous, but they have some benefits and that’s why so many people outside of schools are using them so much,” Warschauer told the Associated Press in an earlier report about iPads in education.

Watts said she will begin to look for grants and other sources of money to make the switch at Jenkins and added that it is part of an attempt to use technology to engage students at a higher level. Middle High School Principal David Lee agreed and said the addition of the iPads would revamp classroom teaching to allow for more student participation.

“If kids aren’t engaged and excited about learning, then we need to look at what we’re doing, the way we’re teaching, and the way classes are set up,” said Lee.

Watts told the board the emphasis on technology is part of a new initiative called Next Generation Learning that includes Jenkins Schools, the University of Kentucky, the Kentucky Department of Education and 14 other Kentucky school districts.

Lee said the use of the Applemanufactured iPads will be particularly effective in mathematics where the technology will allow for advanced students to move forward at their own pace and allow for remedial work for students who are lagging behind, while allowing teachers to spend more time with students in the middle.

In other business at the board’s February meeting, Supt. Watts praised the Jenkins Middle School boys’ basketball team for winning the Letcher County Tournament and thanked everyone who helped Jenkins in hosting last week’s 53rd District High School Basketball Tournament, which was won by Knott County.

Maggard also announced that Burdine would host an open house for incoming students on March 7 from 3:30 until 5:30 p.m., and said testing will be held the last two weeks of school for elementary students. She added that the elementary schools raised $1,200 with a Sweetheart Dance and Valentine Grams, and Burdine raised more than $3,000 with its book fair.

The board voted to hold the Jenkins High School Junior-Senior Prom at the Norton Inn (the old Holiday Inn site on Route 58) in Norton, Va., this year. Principal Lee said the prom is scheduled for May 5, during the same week testing will take place at the Middle High School. He said he felt the decoration and other activity would be detrimental to the testing, so he looked for off-campus sites and the Norton Inn was the closest one available on the scheduled date. He added that after looking at last year’s expenditures it would be less expensive to hold the prom at Norton Inn, which will provide food and snacks as well as doing the clean-up.

The American College Test is scheduled for March 6. The only make-up day for the ACT will be March 27.

Director of Pupil Personnel Harvey Tackett reported a total of 1,001 visits to school nurses at all three campuses and said flu- like symptoms were common throughout the system. Attendance stood at 91.33 percent as of February 17 with the high in Grade 5 at 93.85. Tackett also said he is scheduled to attend the first Annual Bullying Prevention Symposium at Eastern Kentucky University on March 19 and added that Bullying Prevention Workshops will be scheduled for Grades 4-6 at Burdine Elementary School with Kentucky Valley Educational Cooperative Safe Schools Director Dessie Bowling.

This article was compiled from reports by Mountain Eagle writer William Farley and The Associated Press.