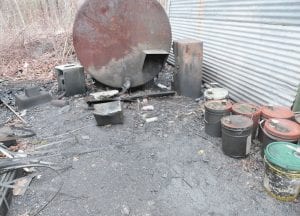 State environmental officials provided this photograph to Jenkins Mayor G.C. Kincer as part of a report filed after an initial inspection of a site beside Main Street that is feared by many to hold toxic waste. The photo shows what is referred to in the report as “stained soils indicative of some kind of release.”

Jenkins Mayor G.C. Kincer has asked the Kentucky Department of Environmental Protection for a “full disclosure” of the agency’s investigation of a suspected toxic waste dump located beside Main Street.

“ The Jenkins City Council recently charged me with the duty of determining the severity of the environmental impact of a suspected toxic dump in the middle of the city limits, near the public library on Main Street in Jenkins,” Kincer said in a statement released this week. “Former Mayor Charles Dixon, filed an official complaint with the city council and legislators in Frankfort concerning the health of his family. I will be requesting from the Department of Environmental Protection a full disclosure of this site in order to satisfy the citizen complaint of Mr. Dixon and to assure our city there is no additional threat to the health of our citizens.

“If this is a legitimate threat,” Kincer’s statement continues, “then time is of the essence. The Department of Environmental Protection has done a general inspection and found suspicious areas that need further study. We will keep the public up to date of any and all correspondence of this matter.” 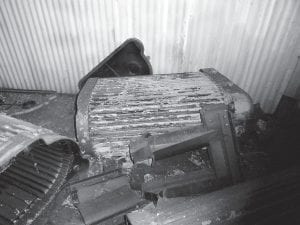 Kincer released the statement a week after Dixon appeared before the council to request a formal investigation of the site, which contains several World War II Quonset Huts that were put there in the 1950s as repair shops for the old Beth- Elkhorn Coal Corporation.

Dixon wrote in a letter to the council and other local and state officials that the site “is known to be saturated by various oils, greases, fuels, and solvents,” and that the shops were also used to repair transformers containing PCBs (dioxin) before it was determined that exposure to PCBs could cause cancer.

Dixon has lived a number of years across Main Street from the site. He says his wife, Lana, suffers from a Parkinson’s Syndrome-like disease that doctors say can be caused by exposure to hazardous waste.

Inspectors with the state’s Division of Waste Management told Kincer they have already visited the site once and plan to return for another visit this week.

Kincer was also provided with a copy of an initial report authored by Division of Waste Management Director Anthony “Tony” Hatton of Frankfort.

In the report, sent by electronic mail, Hatton says “the Division of Waste Management (DWM) conducted an initial inspection of this site on February 29. Based the inspection there were some issues that were identified as being of concern.”

The report continues: “In general there were identified ( in photographs) stained soils indicative of some type of release, the presence of transformer carcasses (could be a concern with PCB’s), containers with unknown contents and some other features that require a closer look. DWM plans to do a second more detailed inspection (this) week that will likely include collecting samples among other things. Soon after the next inspection, DWM will likely be issuing a Notice of Violation to the property owner that will require the site to be characterized and to conduct any necessary cleanup.”

The property has been owned by former Jenkins resident Gary Royalty since Beth-Elkhorn sold its mining operations in the 1980s.