Jenkins soldier on bomber that went missing in WW II 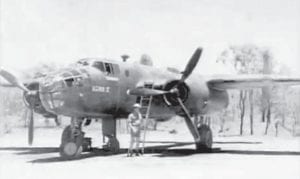 An unidentified soldier stands in front of a B-25C bomber nicknamed the Algernon IV. Sgt. Wilfred D. Coyer of Jenkins was on board the plane when it went missing on the island of New Guinea the morning of January 18, 1943. Word that Coyer and six other crewmen were missing didn’t make it back to Letcher County until February 1943.

As was the case with many of the 149 soldiers from Letcher County who were killed in World War II, little information was released about Sgt. Wilfred Durde Coyer after the B-25C bomber on which he was a crew member went missing soon after taking off from an airstrip on the island of New Guinea early in 1943.

“Friends in Jenkins are again deeply grieved to hear of the missing in action of some of their boys,” Mrs. O.O. Parks wrote at the end of her Jenkins News column in the February 11, 1943 edition of The Mountain Eagle. “News [was] received this week of Durde Coyer missing in New Guinea.”

On the morning of January 18, 1943, just four days after Sgt. Coyer’s 22nd birthday, Coyer and six other crew members stationed at an airstrip near the south coast of New Guinea boarded an aircraft officially known as “B-25C Mitchell 41-12485,” but nicknamed the “Algernon IV.” 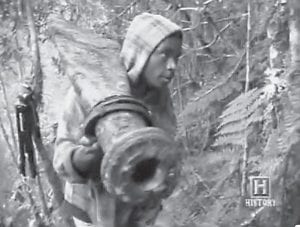 These two images were captured from the History Channel documentary “B25 Down: Hunt for a Hero.” The documentary looks at efforts to retrieve the wreckage of a World War II plane that crashed in New Guinea with a Letcher County soldier on board. Above, a New Guinea Highlands native carries a piece of wreckage of the plane from the jungle in November 1998. Below, Alfred Hagen, great-nephew of decorated pilot Maj. William Benn, looked at a piece of the plane’s fuselage with the U.S. Army Air Forces insignia still intact. Word that the plane went missing in January 1943 reached Letcher County the next month.

Sgt. Coyer was one of three gunners on the plane, and was charged with manning either a single .30-caliber machine gun in the nose turret or one of two .50-caliber machine guns in dorsal turrets atop the B-25C’s fuselage, between the wings and twin tail. The two other gunners on board that morning were Sgt. Herman H. Elsner of Hemlock, Mich., and Staff Sgt. Michael Ewas of Detroit, Mich. Cpl. LaVerne D. Van Dyke of Zeeland, Mich., was the flight engineer, and Lt. Col. Dan B. Searcy of Lewisville, Ark., was the observer. The co-pilot was Maj. Donn C. Young of Dillonvale, Ohio, and the pilot was Maj. William G. Benn of Washington, Pa.

According to information gathered by PacificWrecks.com, a website dedicated to documenting World War II plane crashes in the Southwest Pacific Theatre, the Algernon IV took off from 7-Mile Drome at 9:45 a.m. New Guinea Time (15 hours ahead of Eastern Standard Time) on that Monday. Its mission was to fly to the north coast of New Guinea to conduct aerial reconnaissance of Japanese forces. After no reports were received from the crew at any time after take-off, the plane was presumed crashed and all on board were declared missing in action (MIA). Two days later, on January 20, 1943, a search of the east-west mountains that make up the New Guinea Highlands region where officials believed the plane had gone down ended without success. 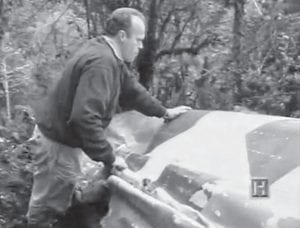 Sgt. Coyer’s career with the U.S. Army Air Forces began in late 1941. According to a front-page article in the June 18, 1942 edition of The Eagle, then-Pvt. Coyer, 21, was undergoing training at the U.S. Army Air Corps Gunnery School in Las Vegas, Nevada. The article said Coyer, son of Mr. and Mrs. Fred H. Coyer of Jenkins, had attended Jenkins High School, where he played football. He was single and had worked as a shuttle car driver in an underground coal mine before joining the Army on December 18, 1941, the report said.

The world’s second largest island, New Guinea is located north of Australia. U.S. soldiers and other Allied Forces were sent there after Japanese forces landed there in 1942. The Allies feared the Japanese would be able to take Australia if they weren’t stopped in New Guinea.

Ironically, it was the Algernon IV’s newest pilot, Maj. William C. Benn, who had been credited with helping a U.S. Army Air Forces left nearly in shambles after the bombing of Pearl Harbor regroup in the ensuing months to slow further Japanese advancements to New Guinea and elsewhere in the Southwest Pacific.

Maj. Benn is known as the pilot who perfected “skip bombing,” a low-level bombing technique developed by the British Royal Air Force but abandoned as being too dangerous.

According to Benn’s great-nephew Alfred Hagan, who was the subject of a History Channel documentary on attempts to recover the Algernon IV from the New Guinea mountains, Benn wiped out more than 100,000 tons of Japanese war ships and cargo ships one night in October 1942 by putting a B-25 bomber “into a dive, achieving a high level of speed, then leveling out at a low altitude” before sending bombs into the sides of Japanese ships. The bomber was flying only 60 feet above water in darkness.

General George C. Kenney, who commanded the Allied Air Forces in the Southwest Pacific Area, said no pilot made a greater contribution toward helping defeat the Japanese than Maj. Benn and his use of skip bombing. General Douglas MacArthur awarded Benn the Distinguished Service Cross, the second-highest military award that could be given to a member of the U.S. Army Air Forces.

On December 20, 1945, Sgt. Coyer, Maj. Benn and the five other crewmembers of the Algernon IV were listed “presumed dead” by the Office of the Secretary of War.

In August 1956, more than 13 years after the Algernon IV disappeared, the crash site was discovered in a jungle in the Mount Strong area of the New Guinea Highlands by a Kiap (patrol officer) from Tapini, New Guinea. Remains of at least one crewmember were believed recovered by the Kiap.

Five months later, in late January 1957, a Royal Australian Air Force team charged with searching for missing aircraft returned to the site and recovered six sets of remains and five identification tags . at RAAF Searcher Team investigated Th the wreckage and determined the crash, which occurred in bad weather, resulted from the plane losing an engine after taking enemy gunfire. The team’s findings were reported to U.S. Air Force officials on February 13, 1957.

On March 9, 1957, the Army reopened its World War II casualty books to change the status of Sgt. Coyer and the others from presumed dead to “killed in action.” Coyer’s remains were returned to Kentucky, and he is buried with the other crewmembers in the Zachary Taylor National Cemetery near Louisville.

According to news reports on March 11, 1957, the Army had no immediate explanation for RAAF Searcher Team’s not finding the remains of one crew member or the identification tags of two, later identified as the co-pilot, Maj. Donn C. Young, and the flight engineer, Cpl. LaVerne D. Van Dyke.

Forty years later, sometime in 1997, Van Dyke’s dog tags were found by natives of the New Guinea Highlands and turned over to a French priest. This finding inspired a search team funded and directed by Philadelphia businessman Alfred Hagen, the aforementioned great-nephew of Maj. Benn, to return to the jungle of steep Highlands for the fourth time in four years to look for the wreckage of Algernon IV.

In November 1998, Hagen’s team, with the help of local natives, finally found the wreckage and in the process recovered Maj. Young’s dog tags. The Hagen team had been unsuccessful the previous three tries because the cause the crash site had been located on the opposite side of Mt. Strong than the RAAF Searcher Team had indicated some 50 years before.

Hagen’s three unsuccessful trips to New Guinea and the successful fourth trip are the subject of a History Channel documentary, “B-25 Down: Hunt for a Hero.” The documentary was released on DVD in July 2008 and is available at Amazon.com. The documentary can also be accessed on YouTube.

The B-25C bomber was nicknamed the Algernon IV by its first pilot, Captain Ronald D. Hubbard, in honor of a soupedup car Hubbard owned as a teenager. Hubbard was promoted after flying the plane in the summer and fall of 1942. Hubbard was later presented with the Distinguished Service Cross for heroism he showed participating in bombing missions against Japanese targets while suffering from dengue fever.