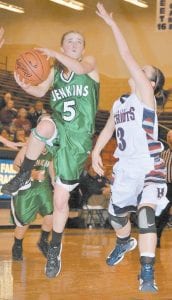 Whitney Creech went up for a layup in a game against the Knott Central Lady Patriots earlier this year. The Jenkins High School freshman is the top scorer in Kentucky for just-completed 2012-13 regular basketball season, averaging 30.1 points per game.

Whitney Creech of the Jenkins Lady Cavaliers finished the 2012- 13 regular season as the top girls’ basketball scorer in Kentucky.

“I was expecting great things from Whitney this season, but what she’s doing is beyond that,” Cavaliers Coach Ashley Addington told the Lexington Herald-Leader recently.

Creech’s offensive ability was on full display against Hazard. She didn’t score in the first quarter, but she finished with 52 points as Jenkins rallied from 20 points down to win 72-67.

“She’s as smooth a ballplayer as I’ve ever seen,” Addington told the Herald-Leader’s Mike Fields. “It’s weird to say, but she plays like a boy.”

Creech has been playing for the Jenkins varsity since she was in the sixth grade. She finished last season with 21 points-per-game average.

“At first she just wanted to shoot from outside, but we kept encouraging her to drive,” Addington told the Herald-Leader. “She’s really developed that part of her game. She’s got great moves now.”

Knott County Central Coach Jeff Honeycutt told reporter Fields that he admires Creech’s talent. “Whitney is a natural scorer,” he said. “She can handle the ball with either hand which makes her very hard to guard. I like her inbetween game. Most girls don’t have a mid-range game. I think she will have a shot at breaking the state’s all-time scoring record.”

Creech finished the regular season with more than 1,800 points. The Jenkins school record of 2,300 was set in 1991 by Kristy Sexton.