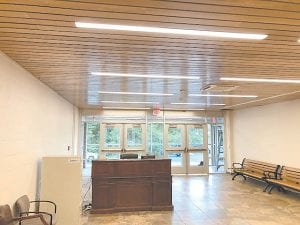 These six photos show some of the remodeling that has taken place at the Jenkins Middle-High School since May. Shown clockwise from botton left are new lockers in the school’s hallway, new showers in a locker room, a secure new entrance/exit, an improved entrance to the gymnasium, and a remodeled bathroom.

It’s been a long, hard road for Jenkins Independent Schools, but after watching and waiting since last May, the bulk of the renovations on the middle high school and elementary school campuses are almost finished.

Jenkins students started classes on Monday, August 26, with new lockers, a new safe limited entry vestibule, and new restroom facilities and locker rooms. There are interactive ‘Smart Boards” in every classroom with touch screens that allow for instant communication through the Internet with students and schools around the world as well.

The middle high school also has a new expanded parking lot, and Clay Ratliff of Trace Creek Construction told the Jenkins School Board at its Tuesday meeting that the contractor will get parking slots striped by Friday. He said the work is 95 percent finished with some touch-up and location items like putting the trophy cabinets in. Ratliff said this was his first experience with a wooden ceiling like the one in the vestibule, and he was surprised at how much it added to the building. He said the work should be 100 percent finished by next week. 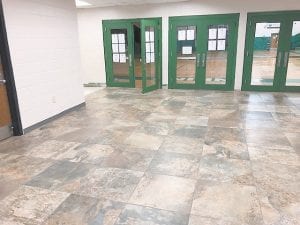 Superintendent Mike Genton said he is very pleased with the work and is particularly happy with the safe entrance measures. Genton said that once students are in the building, entry will be controlled by key cards and the office staff will know exactly who enters and leaves the building at all times. Genton also said that the entire building can be locked down instantly from the central office in the event of an emergency.

Board members were pleased with the changes, and especially happy with the new locker rooms in the gym and the new restrooms. The school was opened in 1971 and many of the fixtures in both facilities dated to the opening, although some upgrades were made. The locker rooms feature new showers and lockers and will have Jacuzzis in both the boys’ and girls’ locker rooms. The old gym entry was enlarged and the doors were moved back to open directly into the gym, making for a good deal of added space and a newly tiled hallway. 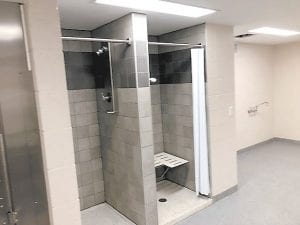 Genton also told the board that there will be extra security at both campuses tomorrow due to what he called vague threats made to schools in another part of Kentucky and in Arkansas. He said the Jenkins Police Department will send extra officers to the school and have regular patrols. The board also unanimously approved the renewal of the contract with the city for the school resource officer.

The board voted unanimously to accept the compensating rate set by the state for real and personal taxes for the coming year. The rate is $85.2 cents per $100 real and personal property and $.69 per $100 for motor vehicles and aircraft. The rate last year was $84.7 for real and $87.1 for personal property. The motor vehicle rate is unchanged. The compensating rate is calculated by the state to keep school funding at the same rate it was the previous year. The renovations to the school were paid for by the Kentucky Department of Education and did not come from local taxpayer funds. 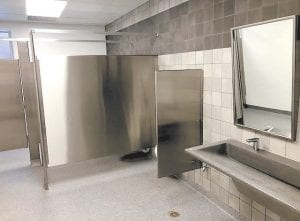 Genton reported that Jenkins vocational students who are attending Wise County Vocational School have attended vocational classes since August 6, the first day of classes for Wise County Schools. Genton said that although Jenkins Schools were not in session, the system provided bus transportation to Wise for the vocational students. He said everything is going well with the change to Wise County, and the students are happy with it.

In other business, District Finance Officer Candala Gibson told the board that auditors from Cloyd and Associates of London will be at the school on Wednesday. August 28. She said this is an unusually early start, but she is ready for them with all the records they will need. Gibson also said that as of July 31, the General Fund account stood at $644,876.60.

Superintendent Genton reported that 401 students attended the first day of school, but said there were a few more on the roll that did not show up. He added that there are 24 high school students who are attending Dual Credit classes through the University of Pikeville, the Whitesburg campus of Southeast Kentucky Community and Technical College, and Eastern Kentucky University. He said criminal justice is one of the most popular courses. The goal is for at least some students to be qualified for an associate’s degree by the time they graduate from high school. 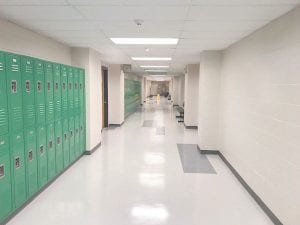 Middle High School Principal Stacy Collier accompanied the middle school football team to Cumberland for a football game. Elementary Principal Amanda Anderson told the board that the enrollment at Burdine Elementary kindergarten had grown to two classes that require two kindergarten teachers. She said staff at Burdine has created a master digital document that contains transportation information for every student and they know instantly which students ride the bus and who are picked up at school.

Anderson said Burdine students are extremely happy with upgrades and innovations at their school, and staff is pleased as well. Another change at Burdine is switching classes for second and third grades. Anderson said the students are very proud of themselves for being so grown up.

The board voted to approve the updated calendar that accommodates the August 26 opening date. The last day of school for students is May 21.