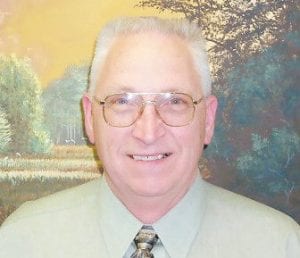 John Shook, above, is serving his final days as superintendent of the Jenkins Independent School System. His replacement, Deborah Watts of Knott County, was named last week.

Shook told The Mountain Eagle that as long as the Jenkins System offers a quality education and taxpayers in the City of Jenkins are willing to support the school system, there is no reason to believe it will ever become part of Letcher County Schools. Shook also said a $2 million upgrade to all three campuses in the school system will be complete by the time school opens in August, and schools will have new floors, ceilings, lighting systems, and a new heating and air conditioning tower will be complete at Jenkins Middle-High School.

Superintendent Shook said as he prepares for what will be his last meeting with the Jenkins Independent Schools Board of Education as superintendent, his feeling is bittersweet but he believes he leaves the system in good shape for the next superintendent. Shook, a 1959 graduate of Jenkins High School, returned to Jenkins seven years ago as superintendent. His wife, Rosemary, also a Jenkins graduate, taught at Jenkins until her retirement.

The couple previously taught in Florida, North Carolina, Tennessee, and Virginia. Shook returned to Kentucky to serve as director of pupil personnel and principal at Arlie Boggs Elementary for Letcher County Schools before accepting the superintendent position at Jenkins. He said the return to Jenkins to finish his career meant more to him than words could express.

“I’ve been humbled by being allowed to do this,” said Shook. “Everyone has been excellent to work with.”

Shook said his initial efforts in Jenkins involved making sure each student was treated equally and without regard to family situation or from where they came. He said teachers at Jenkins have a big impact on their students’ lives and the school is very important to students as well as the entire community.

Among the accomplishments and improvements to the system during Shook’s tenure were reconfiguring the system so that sixth graders were placed in elementary schools rather than being moved to the middle high school and placing working communications systems on school buses. Shook said one of the worst days of his life occurred when buses had already been sent out and an ice storm struck. The buses couldn’t be called back but fortunately, there were no accidents. Now principals can be in contact with bus drivers at any time and a computerized phone system can alert parents when school is called off. He said the four day school week probably had the biggest impact on the system and is now being considered as a possible standard for the entire state because of excessively high fuel costs.

Shook said having the board take over management of the system’s athletic fields from the Jenkins Athletic Association also benefited the system by allowing them to use general funds money to make gradual improvements to the facilities. He said it made for better playing fields for Jenkins athletes and upgrading the lighting and seeding the fields greatly improved the facilities. Shook expressed particular gratitude to Jenkins resident Mark Johnson, who coached the Jenkins football team in the absence of a teacher/coach for three years.

While they dropped slightly in the past year, scores on state and federal testing have consistently gone up during Shook’s tenure. Shook took no credit but attributed both the scores and the generally good quality of education at Jenkins to teachers, administrators, and staff. He said one thing which has really made a difference is having Jenkins graduates return to the system to teach. Five Jenkins High School valedictorians are currently teaching in the school district. He also spoke highly of the ability of both principals and the central office staff.

“We have seen some of our best and brightest return to the system,” said Shook. “This solidifies the school district. These are Jenkins people and a product of the Jenkins School System.”

Shook said the low teacher-topupil ratio is another important factor in Jenkins’ success. He said smaller class sizes allow teachers to address student needs immediately, which isn’t always true with larger classes. Shook said while Jenkins teachers, like all teachers in Kentucky, are well aware of the requirements of state-mandated instruction, they do not allow curriculum requirements to get in the way of teaching and will not sacrifice a “teachable moment.”

Shook also spoke glowingly of the students in the Jenkins system. He said students have taken the process of their education very seriously and this year’s graduating seniors in particular had been very enthusiastic about testing.

“This group of kids came out and did what they had to do,” said Shook. “The one day seniors took the tests, we had 100 percent attendance.”

Shook said financially the schools are sound, but like all school systems in Kentucky, they are dependent on the whims of the General Assembly. He mentioned the legislature’s decision to give raises to all teachers throughout the state but only funding them for one year as an example. Shook said while the raises didn’t go away after the first year, the General Assembly’s funding did, resulting in layoffs and other financial difficulties for some systems.

When asked about the possibility of Jenkins being absorbed into the county, Shook said the likelihood is “never.” He referred to the school system’s rich history and heritage and said the coal companies which supported the system, Consol and Beth- Elkhorn, had depended on the schools to provide a high quality education so they could easily transfer management people into Jenkins without their children having to sacrifice a good education.

“If they felt like they could do better with another system, they would have,” said Shook. “As long as green blood flows green, it would take a lot of adversity for us to think about giving up the system. The school board is composed of Jenkins products and we want to have even more Jenkins graduates teaching in our schools.”

Shook said the future of the school system is closely tied to the future of the city and both mean a great deal to each other and are inseparable in most people’s thinking. He said Gateway Industrial Park has been a big factor in bringing jobs to the city and he hopes Letcher County Economic Development Director Joe DePriest’s prediction of a federal prison locating in Jenkins will bring more families to the city. However, Shook said the eventual determination is up to the schools, the faculty and staff, and the board.

“As long as the school district focuses on the needs of kids instead of adults, the district will do what it needs to survive,” said Shook. “We can’t forget the main objective is to educate all the kids and that is shared with the community. It’s up to the school district to make sure people are being given a product worthy of their support, a well-educated child.”