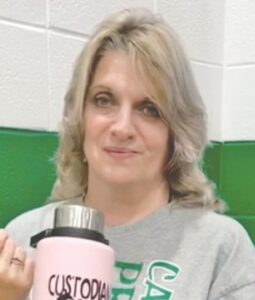 The Jenkins Independent School District has suffered the loss of a second staff member because of the pandemic.

Colleen Franklin, 56, died Sunday at Pikeville Medical Center after a lengthy battle with COVID-19. She served the school district as a custodian, most recently serving at Jenkins Elementary School. According to Jenkins Superintendent Damian Johnson, Franklin — known in the district as “Miss Colleen” — had worked in the school district for seven years prior to the current school year.

Franklin is the second Jenkins staff member to die within the past month while battling COVID-19. Joannie Bartley, a 28-year-old math teacher at Jenkins Middle School, died Sept. 20, also at Pikeville Medical Center.

Johnson said any loss of a staff member is difficult, but to lose two within such a short time is “heartbreaking.”

Johnson said Franklin, a Jenkins graduate, started out with the school district as a parent volunteer and was eventually offered a job as an instructional supervisor. He said most recently, she had worked as a custodian and a food service employee at the elementary school. Her reputation was that of someone willing to help in any capacity.

“Her job was custodian, her job was food service; but who she was, was, ‘How can I help?’” Johnson said. “She was the type that when someone needed help, she’d lay down what she was doing and help someone else. Whether it was helping with food service, or if we had an event at the high school, she would be the one to step up to help out. That’s how I’ll remember her.”

Johnson said Franklin and Bartley were both selfless individuals. He said their loss hurts, but their legacy is that of service to the school district’s students, staff and parents.

“It doesn’t matter what your job title is, sometimes people need help and hopefully someone will be there to help,” Johnson said. “That’s who Colleen is and that’s what I’ll try to remember about her and Joannie both.”