Jenkins takes 8th All ‘A’ title 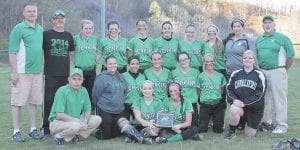 The Jenkins High School Lady Cavaliers softball team and coaches were all smiles after winning another 14th Region All ‘A’ Championship.

The 14th Region All ‘A’ championship game was held Saturday at Hazard High School with the Jenkins Lady Cavaliers seeking their eight consecutive title.

Jenkins jumped out early on Hazard when Charity Niece led off with a single to center, followed by Lexi Stambaugh with a double to right field.

Melissa Bartley hit a deep shot to right to get an in- park home run to give Jenkins a 3-0 lead.

Jenkins added a run in the third inning when Melissa Bartley singled, moved to second on a fielder’s choice, stole third and scored on a throwing error.

The Lady Cavs opened things up in the fourth inning as Deidra Banks and Charity Niece had backto -back singles.

Lexi Stambaugh doubled to left and scored Banks and Niece. Stambaugh scored on a double to center from Melissa Bartley.

In the bottom of the fourth, Hazard’s Brianna Sparkman reached base on a lead-off walk, followed by back-to-back errors by Jenkins to score Sparkman. Alyssa Muha stole home, and Alexis Griffie singled to score Morgan Robinson to cut the lead 10-3.

In the fifth, Hazard’s Sparkman got another walk, Muha reached base on an error, and Robinson singled to score Sparkman to make it 10-4.

Melissa Bartley singled to score Stambaugh, Bartley stole third and scored on a throwing error to make the final score 17-4.

Jenkins Lady Cavaliers met up with the Leslie County Lady Eagles in the semi-final game.

In the first inning, senior catcher Charity Niece got things started with a single, Melissa Bartley had a double and Caitlynn Estevez reached base on a throwing error.

Makayla Seals also reached based on a throwing error. Backto back throwing errors by Leslie cost it two runs as Niece and Bartley both scored.

Katie Depriest, running for Estevez, score on a single from Whitney Creech to take a 3-0 lead.

In the third inning, Melissa Bartley led off with a single, Cait- lynn Estevez once again reached base on a throwing error which moved Bartley to third, and then scored on a fielder’s choice from Makayla Seals.

Whitney Creech singled to center and McKenzie Gibson reached base on a fielding error.

During the error Katie DePriest, running for Estevez, scored to take a 6-0 lead.

In the fourth inning, the Lady Cavs had back-to-back singles from Charity Niece and Lexi Stambaugh. Melissa Bartley reached base on a fielding error, scoring Niece for the 7-0 lead.

In the sixth inning, Leslie made some noise as it loaded the bases on two walks and a single. Napier received a walk to score Farler, and Estep hit into a fielder’s choice, scoring Combs to cut the lead 7-2.

Jenkins held on to pick up the win. The Lady Cavs had 7 runs on 7 hits. Leslie County had 2 runs on 4 hits. Caitlynn Estevez had 11 strikeouts in the game.