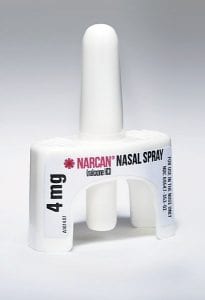 The Jenkins Independent Board of Education has moved a step closer to adopting a policy that will allow qualified personnel to use the anti-overdose drug naloxone in case a student overdoses on heroin or a narcotic painkiller while at school.

The issue of whether to equip the Jenkins High School with at least one of the free two-dose boxes of naloxone now available to Kentucky schools was raised at last month’s board meeting by School Nurse Lisa Collins, who asked the board to approve keeping the drug on hand. The board agreed, and Superintendent Mike Genton said he believes the Kentucky School Boards Association (KSBA)will soon recommend keeping the substance, which is sold under the brand name Narcan, on hand at all Kentucky schools. Genton said that having Narcan available for use by trained personnel is a commonsense measure when considering the problem with drug abuse in Kentucky.

At Monday night’s meeting of the Jenkins School Board, Genton presented board members with a draft of the KSBA’s recommended policy. The board approved the first reading of the policy and agreed to add it to the district’s policy manual after the second reading.

The National Association of School Nurses (NASN) has been helping lead the drive to get school systems such as Jenkins to equip themselves with the Narcan that is being made free to many schools (the normal cost is $37.50 per dose) through a joint effort by the Clinton Foundation and Adapt Pharma, which markets and distributes Narcan.

The Kentucky Office of Drug Control Policy agreed to allow Kentucky’s public school districts to decide if they wanted to have emergency doses of Narcan on hand last spring after Adapt Pharma announced it would provide all high schools in the U.S. with a free two-dose carton of the drug, which has been credited with saving the lives of many opioid abusers and addicts in Kentucky and elsewhere. While narcotic drug overdoses are not frequent among high school students, the National Association of School Nurses and other proponents of the drug say that with the nation’s heroin epidemic continuing to grow, it makes no sense not to have the antidote for heroin and pain pills available to nurses and other trained staff members who serve as first responders.

The Kentucky Department of Education (KDE) says designated school staff members must undergo training before Narcan can be accepted.

“Once personnel are trained, the two doses of Narcan will be provided free of charge,” KDE said recently through its publication Kentucky Teacher. “Once those are used or the drug expires, it will be up to the district or school to provide a replacement. Under the program, Narcan will be distributed to schools as a nasal spray, and is to be used only for overdose of opioid drugs which include heroin, or opioid-based prescription painkillers such as Percocet, morphine or those containing codeine.”

The publication also points out that naloxone attaches to the same parts of the brain that receive heroin and other opioids, and it blocks the opioids for 30-90 minutes to reverse the respiratory depression that would otherwise lead to death from overdose.

In other business at its October meeting, the Jenkins board received a breakdown of the district’s KPREP test scores and learned that school performance has dropped overall, but did rise in a few categories. The overall rating of the district is “Needs Improvement,” as it dropped by 9.3 points from 74.5 to 65.2. However, Jenkins High School continued to be rated Proficient with a 70.5 rating for 2015–2016, down slightly from the previous year’s score of 72.1 The middle school and elementary school both dropped into the “Needs Improvement” category, with the elementary school having the biggest drop, from last year with a score of 79.4, to 62 in 2015–2016. The middle school dropped from 72 to 63.2.

There were other bright spots as well, with Elementary Principal Stacy Collier reporting that reading scores for the fourth and fifth Grades going up, while the third grade’s scores dropped. Social studies and language arts scores were up as well, and the number of Proficient ratings per student met or exceeded the state average in mathematics and reading. Collier was upbeat and told the board the staff is already using the data and working to improve scores for next year. “We have work to do, but we’re on the right track,” said Collier.

MHS Principal Eddie Whitaker agreed and told the board that while the schools were below state averages in most categories, the staff is already working on strategies to improve scores. Genton, in his first year as superintendent at Jenkins, said he has seen a lot of intense work from the staff and the focus is on instruction.

In the campus report for the elementary school at Burdine, Principal Stacy Collier reported that October has been a busy month for elementary students, with guest speakers at the school and off-campus visits. Collier said an Abe Lincoln re-enactor visited, and students attended the Indian Summer Folk Festival at the Little Shepherd Amphitheater and visited the Letcher County Extension Office. Report cards went out at Burdine last week and Collier said that parents and business people will set up trick-or-treat booths around the Burdine Freewill Baptist Church on Halloween day so students can get candy there. Red Ribbon (drug prevention) week is currently underway and the Burdine festival, a fund-raiser to raise money for Christmas presents for students, will be held on November 4. Last week was Safe School Week at Burdine Elementary.

High school activities have focused on college prep, with JHS seniors visiting the University of Pikeville for lunch and a campus tour in late September, along with meeting with representatives of the Kentucky Higher Education Assistance Agency to discuss financing their education, and participating in a FAFSA (Free Application for Federal Student Aid) workshop. The high school participated in National Anti- Bullying Week Activities on October 18–21 and seniors attended the play “Dracula” at Jenny Wiley Theater in Pikeville. Red Ribbon Week is also underway at the high school, and the ACT will be given on November 22.

Technology Director Damien Johnson reported that the security system for both campuses has been upgraded with all digital cameras, with 59 cameras overall. The system also has remote access and can be accessed through personal communications devices. Johnson said every student and staff member now has a Google account and the system has 555 student devices in the district, including iPads and desktop computers.

Johnson also told the board that the Data Seam Program, a state-wide program which has paid for 406 new Apple computers for the system and was funded by coal severance tax funds, will not continue, since a revised funding source was vetoed by Governor Matt Bevin. He asked the board to consider a request to the state legislators, 29th District State Senator Johnny Ray Turner and 94th District State Representative Leslie Combs, for restoring funding for the program. Johnson said that participating in the Data Seam program has allowed a small school system like Jenkins to be the equal of much larger and wealthier systems in technology.

The board also heard a report from Celesta Riffe of the Gear-Up Program. Riffe said the program is funded and managed by Berea College and is designed to prepare students for college. She said that everything about the program is built on the goals of making sure students graduate from high school, making certain students are ready for college, and making their families aware of the need for college. The Jenkins system receives $55,000 in funding from Gear-Up, and Missy Baker is the Gear-Up coordinator for Jenkins. Riffe also told the board that JHS students Jacob Bentley and Jason Sandin have been chosen for Gear-Up’s Primary Appalachian Leaders in Service program.

• The board declined to vote on a proposal to allow for a waiver so students attending the University of Pikeville in the Dual Credit Program can drive their own vehicles to campus when there is no school in Jenkins. The system will continue to provide a bus for their needs on those days as well.

• Superintendent Genton reported that enrollment is up to 454 from 438 last year and added that he and Director of Pupil Personnel Rondall Baker are working on improving daily attendance.