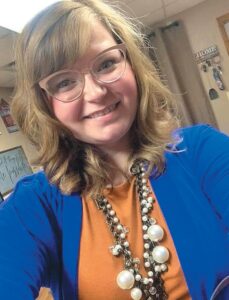 A teacher at Jenkins Middle-High School died this week of complications from COVID-19.

Jenkins Independent Schools Superintendent Damian Johnson said Joannie Bartley, 28, of Pike County, died Monday evening at Pikeville Medical Center after a bout with COVID-19. Bartley was a mathematics teacher for grades six through eight at Jenkins Middle-High School. Johnson said Bartley had been a member of the Jenkins staff for about seven years.

Bartley is the first staff member in the Jenkins Independent Schools District to die of COVID-19. Johnson said Bartley had underlying medical conditions that made him concerned when she chose to return to the classroom at the beginning of the current school year. He said Bartley wouldn’t take “no” for an answer on being in the classroom.

“She had the heart of a teacher,” Johnson said. “She could have used her (health condition) to get on disability and not work. But she loved her kids and she wanted to be here in the classroom to make a difference in her kids’ lives.”

“You couldn’t help but like her, but I gained a lot of respect for her wanting to come back into the classroom,” he continued. “She was one of the first ones that wanted to get back in front of her students.”

The staff in the Jenkins Independent District totals around 70. Johnson said having such a small staff allows him to get to know each staff member and their families, and that also makes losing someone even more difficult. He said the middle school instructional staff is a small, but close-knit group.

“We’re not a normal school district,” Johnson said. “I know every staff member and every one of their spouses, and we have a family atmosphere that you don’t find at a lot of school districts. What I expect is that we’re going to see what makes Jenkins special out of this situation. We’re going to see everyone pull together to help support one another and to support Joanie’s family.”

Johnson said Jenkins Independent Schools has one counselor on staff. He said the Letcher County Public Schools District provided eight additional counselors — six active and two retired — to the Jenkins system to help the district’s students and staff while they grieve the loss of Bartley. Johnson expressed his gratitude to Letcher County Schools and to Superintendent Denise Yonts for their support.

Johnson expressed his condolences to Bartley’s family, her co-workers, and her students. He said he plans to dismiss school in the district on the day of Bartley’s funeral, the arrangements for which were not yet available at press time Tuesday.