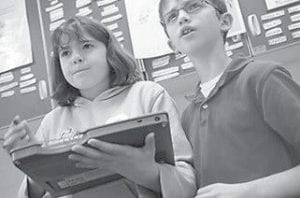 A promotional photo from Interwrite Learning shows students using the Interwrite Pad, demonstrated Monday to the Jenkins School Board.

The Jenkins Independent Schools Board of Education was treated to a demonstration of math education in the 21st Century at its February meeting.

Hannah Harrison, who teaches math in grades 7 through 12 at Jenkins Middle High School, demonstrated the Interwrite Pad, which she compared to the computerized Smart Board. The Interwrite Pad is a hand-held device that interacts with a projector and functions as a computerized blackboard and uses a scribe to “write” on the screen.

Harrison told the board that while the Interwrite Pad is especially effective in teaching math, it can also be used for teaching language arts, science, physics, and other disciplines. She said the math textbooks used by JMHS have downloadable PDF (Portable Document Format) files which can be used by the Interwrite Pad and shown on screen just like the real book. She said one big advantage is a teacher can teach from any place in the room and the results are still shown on the screen. She demonstrated by writing several trigonometry problems on the Interwrite Pad.

“It really engages the kids,” said Harrison. “They live in a technology savvy world. It works like a Nintendo DS, and has Bluetooth (wireless) technology.”

“Technology like this really engages students,” said Johnson. “With the X Boxes (and) Nintendos they have at home, they often have to power down when they get to school.”

Harrison conducted one training session on the Interwrite Pad for teachers in November, and told the board that while she wasn’t asking for more of the instruments at this time, if they had some extra funds, the Interwrite Pad would be a good investment.

Superintendent John Shook added that for math teachers especially, the Interwrite Pad is an effective tool because it minimizes the time teachers have their backs to their class.

Shook said that using chalkboards has become almost a thing of the past because of classroom management problems created by teachers having to spend so much time with their backs to their students.